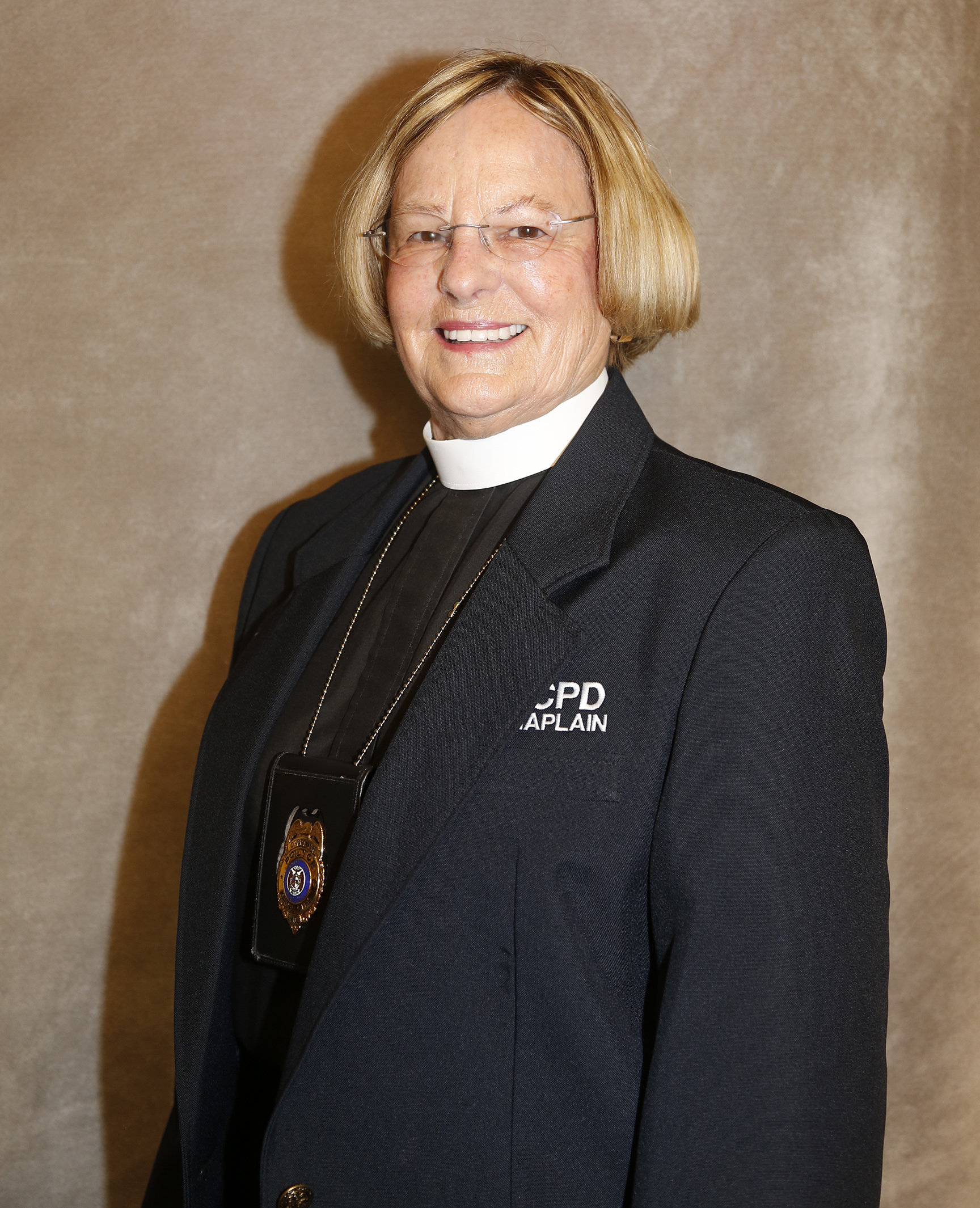 Reverend Susan McCann, Episcopal priest and social worker, is honored to serve the women and men of the KCPD who protect and serve the residents of Kansas City. She received a Master of Social Work Degree (M.S.W.) from the University of Kansas in 1986 and a Master of Divinity Degree (M.Div.) from the Seminary of the Southwest, in Austin, Texas in 1996. Prior to seminary she served for fourteen years as President and CEO of Marillac, a center providing comprehensive psychiatric care for children and youth. During seminary she served as a chaplain at the former Bethany Hospital in Kansas City, Kansas, and St. David's Hospital, Austin, Texas. Ordained to the priesthood in 1996, Reverend Susan served from 1996-2018 as Rector of Grace Episcopal Church. In 2018 she left the parish to devote her ministry to full-time community issues, particularly racial justice, economic equity, predatory lending, and universal healthcare. She serves on a number of Boards of Directors of community organizations and has received numerous awards for her social justice work, including her efforts for full inclusion of LGBT persons in the Episcopal Church, and her advocacy for marriage equality.

A native of New York City, once a fan of the Brooklyn Dodgers and Giants football, she now enthusiastically cheers for the Royals and Chiefs. An avid fly-fisherwoman, Reverend Susan and her husband, John, also an Episcopal priest, love to escape to Colorado to fish the streams and hike in the Rockies. They have a blended family of five adult children. One daughter-in-law is a police officer with the Oklahoma City Police Department and a nephew is a Deputy Sheriff in Fannin County, Texas.

Reverend Susan is most grateful for the opportunity to minister the presence of Christ to the men and women who put their lives on the line every day to protect and serve our community. 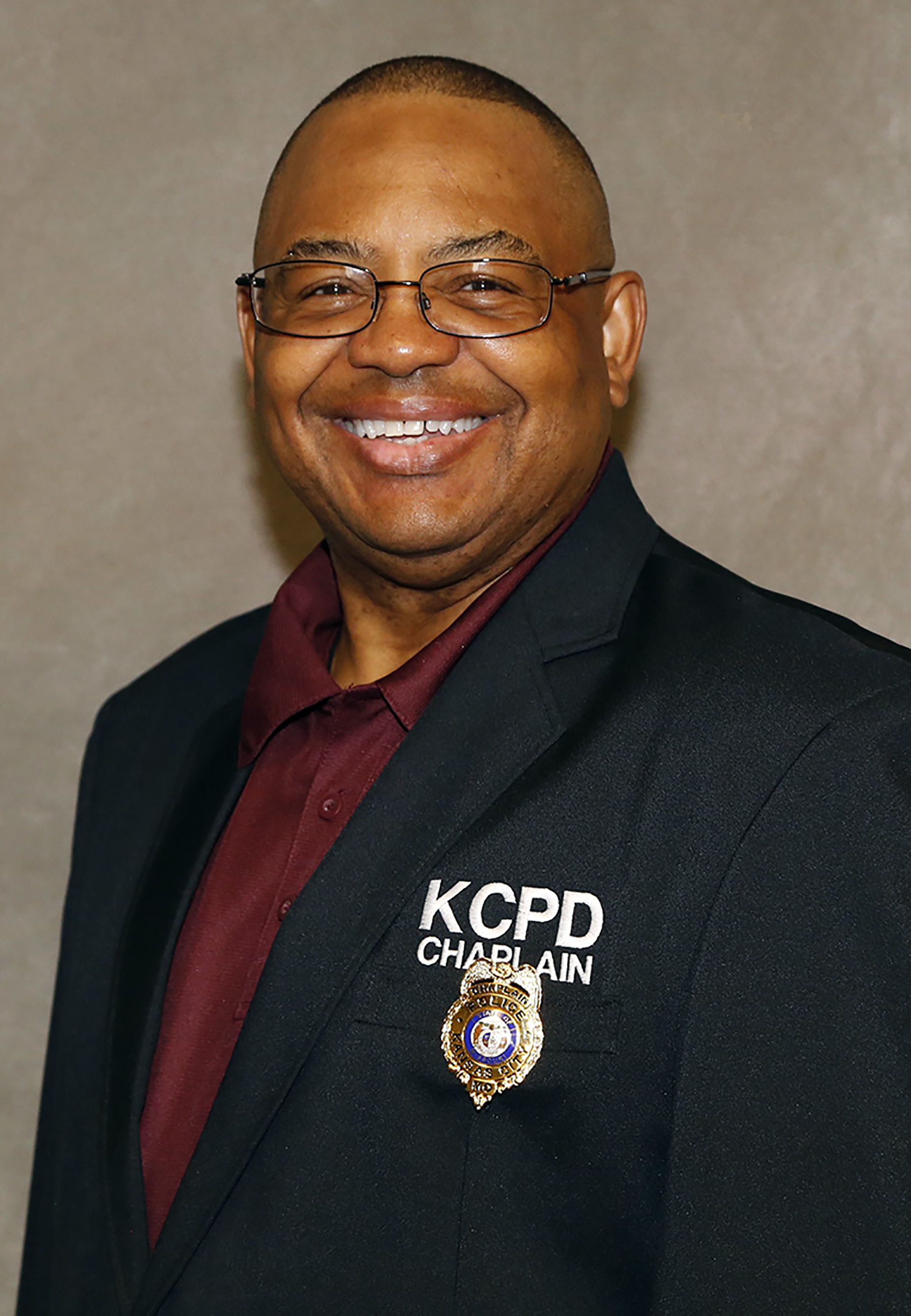 Pastor Herman Gantt is originally from Arkansas and has been a pastor for 28 years. Presently, he is Pastor at New Beginning Apostolic Church, 200 N Bales, in Kansas City. Pastor Gantt served 4 1/2 years in the United States Marine Corps. He has been marred for 44 years to his wife Judith and has two adult sons. 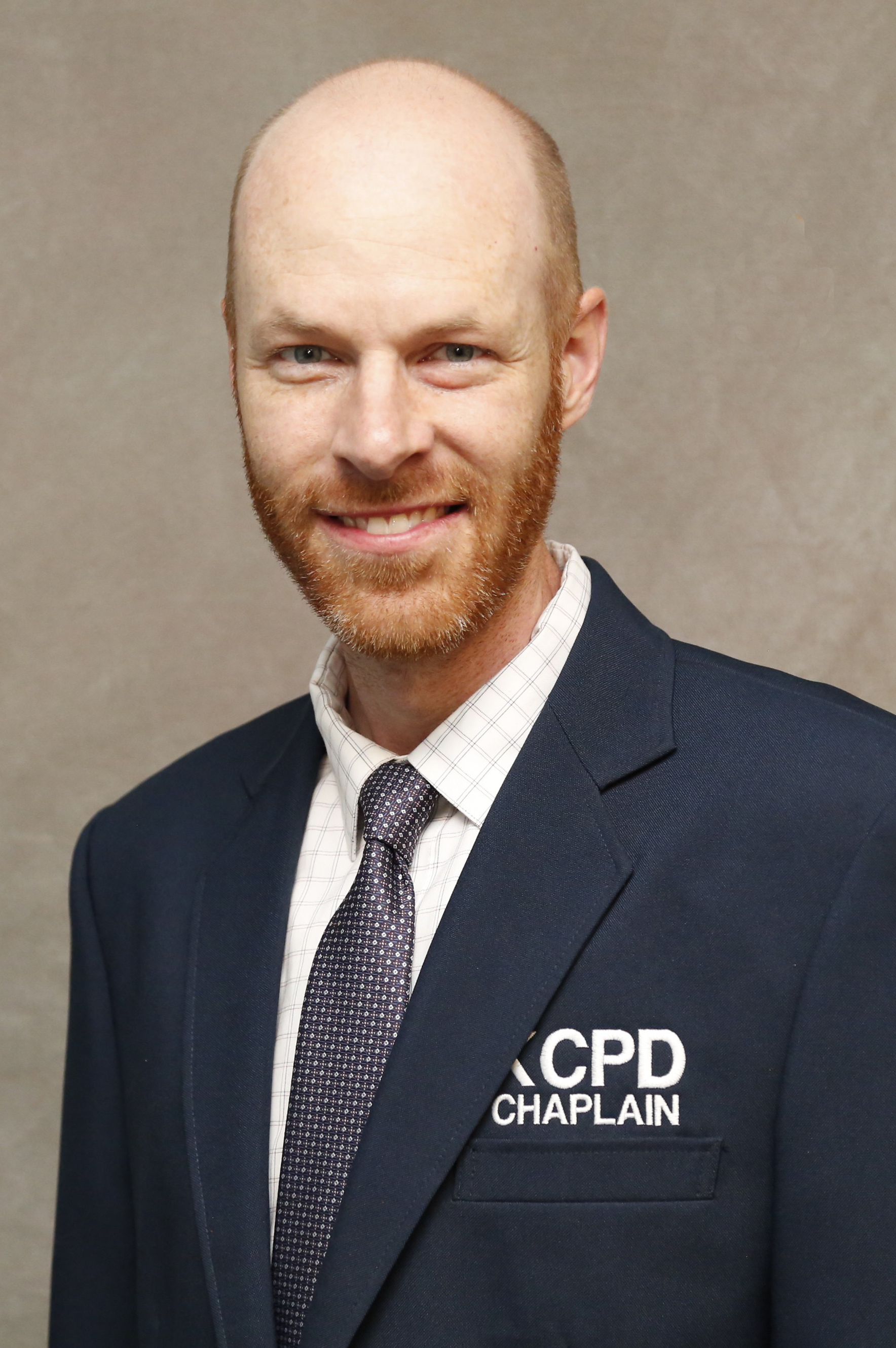 Chaplain Bill Gorman's passion for police chaplaincy is rooted in his experiences growing up in a law enforcement family. His father served as police officer and detective in the St. Louis area for over 25 years. Bill is the Campus Pastor at Christ Community Church's Brookside Campus. After graduating with a BA in Advanced Biblical Studies and Biblical Languages from Calvary University, he completed a Masters of Divinity degree at Trinity Evangelical Divinity School in Chicago. He joined the staff of Christ Community in 2008. Bill, his wife, and their three children live in the Brookside-Waldo area of Kansas City, MO. 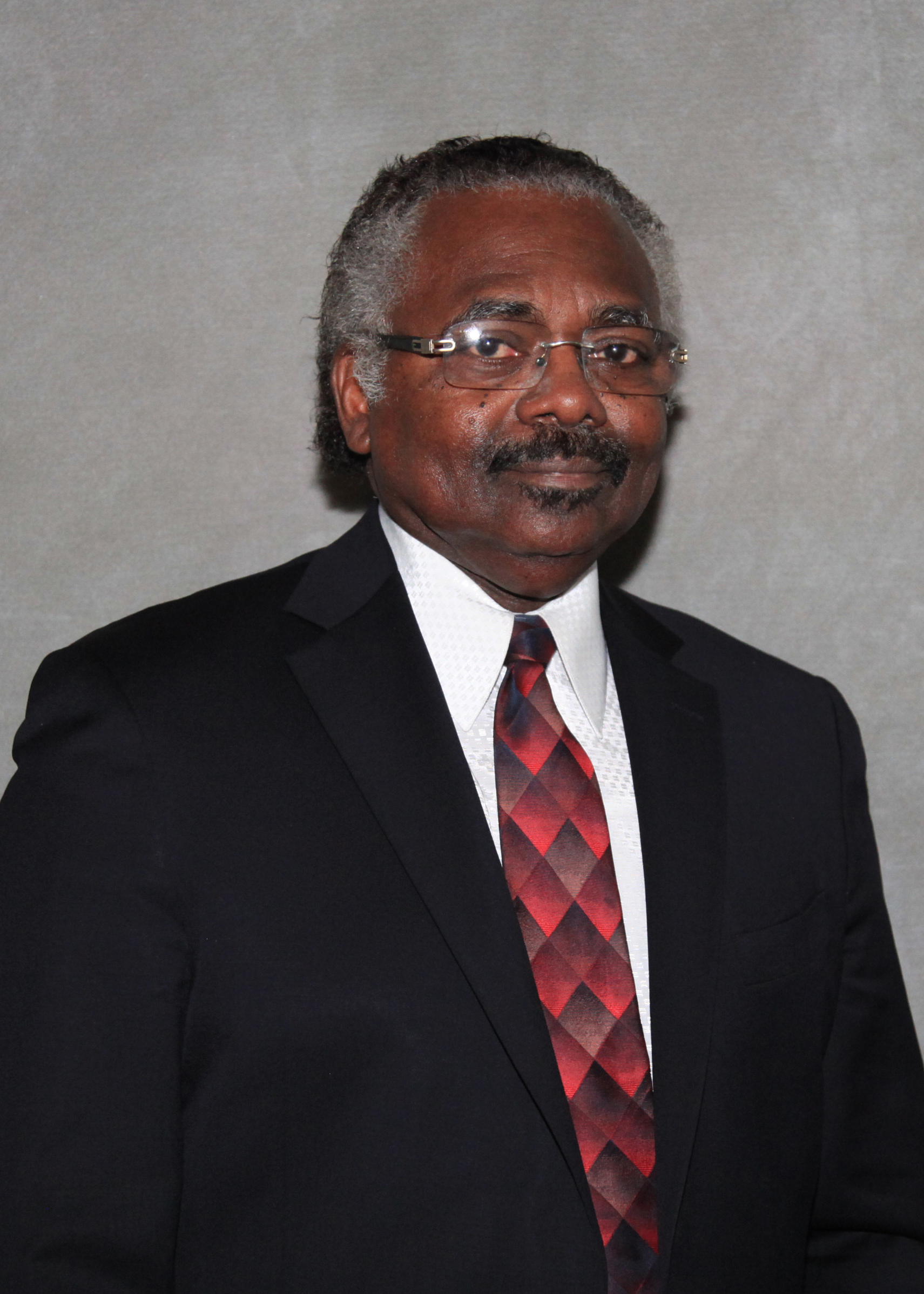 He was also a teacher in the Little Rock Public School system, and an instructor at Arkansas Baptist College.  He served as the Moderator of the New Era District Association, Kansas City, MO which includes 43 local churches for 12 years.  He is a long time friend of President Bill Clinton.

He is married to Jeanette Richard Miles and they have three children, 6 grandchildren and 4 great-grandchildren. 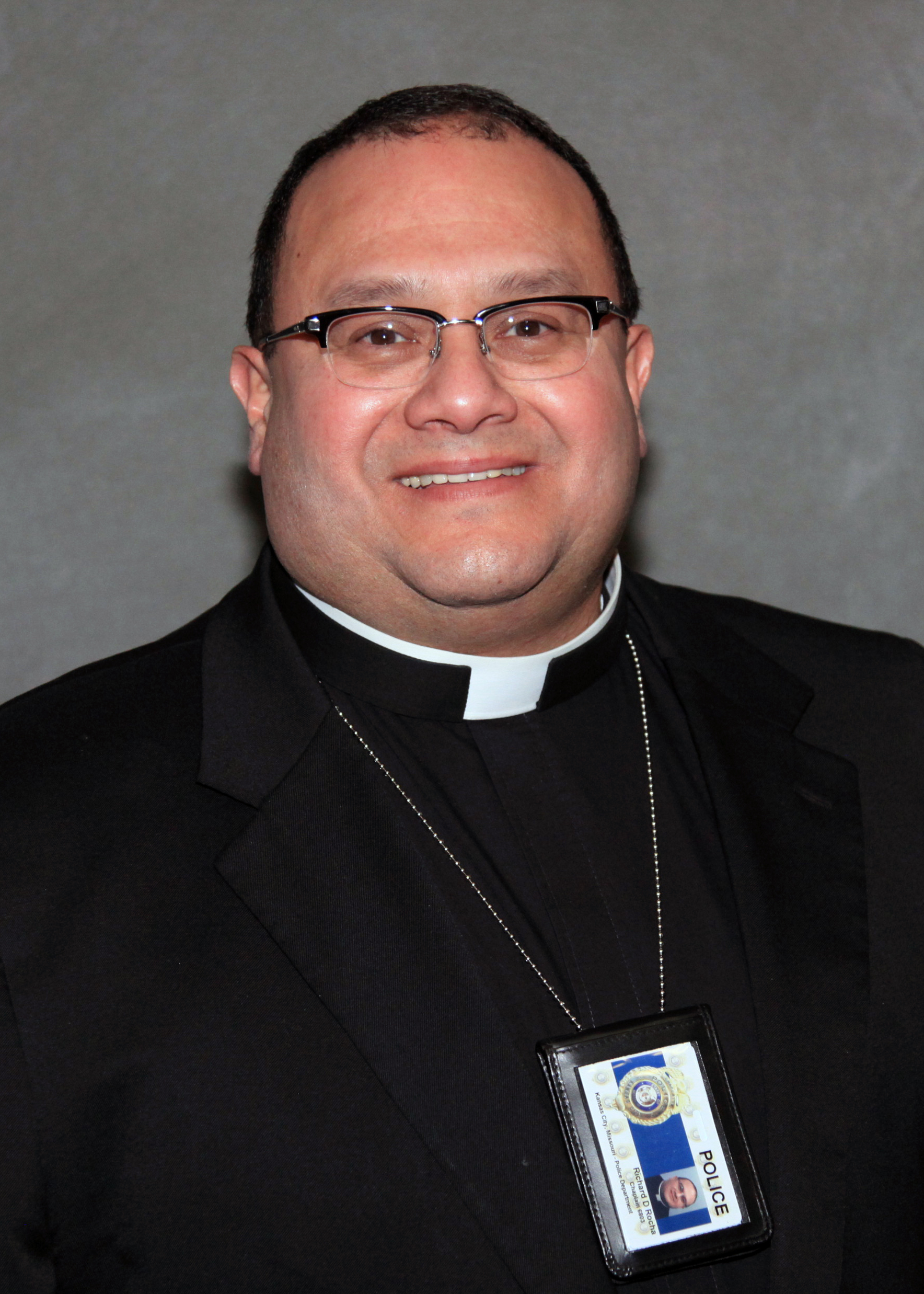 Father Richard Rocha has been a KCPD Chaplain for 4 years. He finds it an honor to help serve our men and women who protect our beloved City of Kansas City, MO, and equally to be present to help our community to embrace Christ in their time of need. Fr. Rocha was ordained to the priesthood for the Diocese of Kansas City-St. Joseph on June 1, 2002. He has a Masters in Divinity from Mundelein Seminary in the Archdiocese of Chicago. He also holds a Bachelors and Masters Degree in Education. Before entering the Seminary, Fr. Rocha was a football coach and teacher on the high school and college level for 14 years. He currently serves as Pastor of St. Matthew Apostle in Kansas City, and also serves as the Catholic Chaplain for the Kansas City Chiefs and the Kansas City Royals. 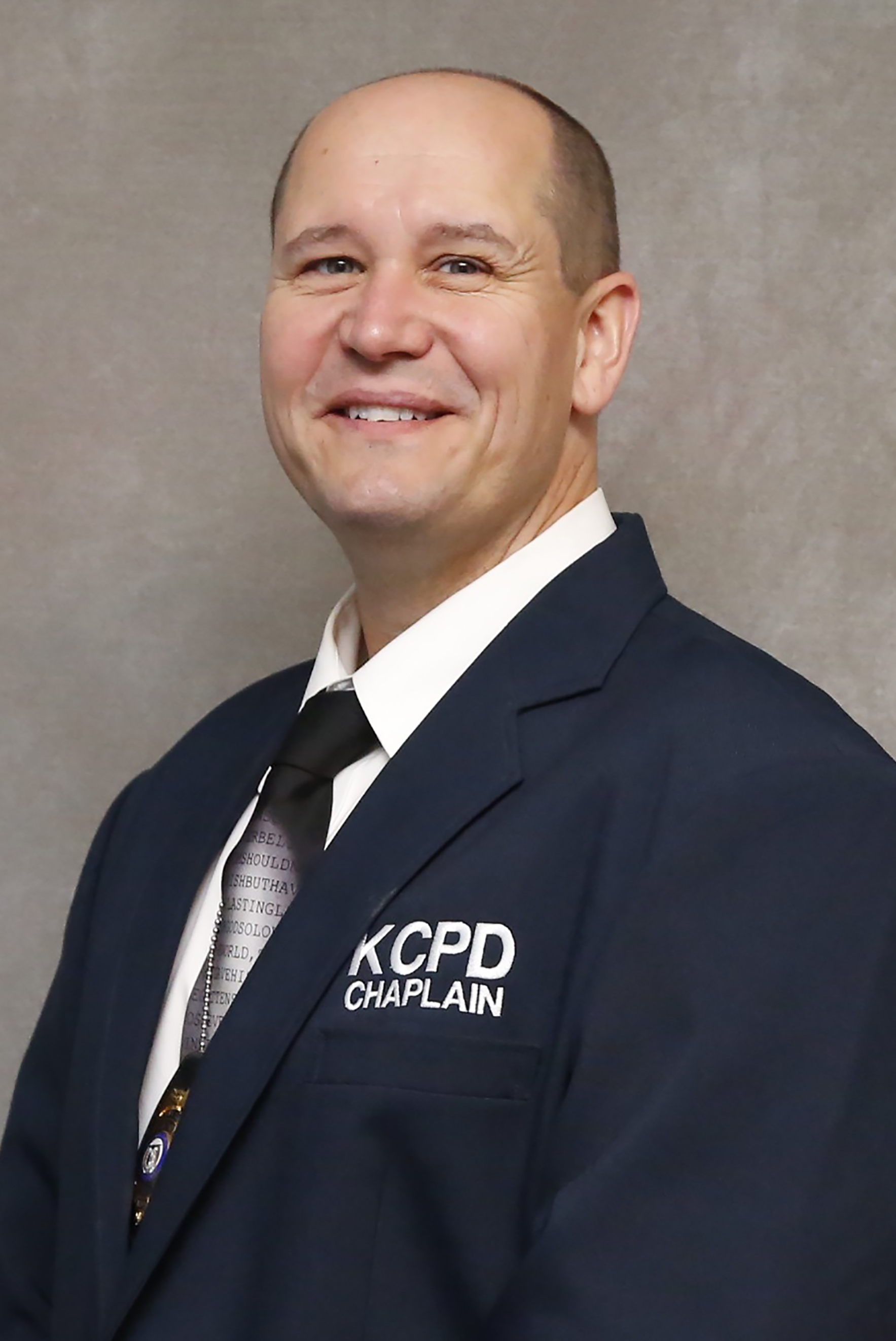 Pastor Shane Stamm feels blessed to be a Police chaplain for KCPD. He served on the Kansas City Missouri Police Department as a Detention Facility Officer for two years, and then as a Police Officer for 19 years. God called him out of Police work and into full-time ministry in 2013. He has been serving at Open Door Bible Baptist Church in the Northland for 9 years. Pastor Stamm was born and raised in Alton, Illinois until moving to Kansas City at the age of 10. He grew up in the Historic Northeast area, graduating from Northeast High School in 1992. He's a huge Chicago Bears fan, loves riding motorcycles and dirt bikes, but most importantly spending time with his family. He has been married to his high school sweetheart for almost 26 years and has three wonderful children ages 25, 21, and 10 - because God has a sense of humor. His wife is a Shoal Creek Crime Free officer and his 21-year-old daughter is assigned to parking control.

Pastor Stamm looks forward to spending time with the Police Department family and shares a favorite encouraging verse of scripture:

Proverbs 21:15 When Justice is done, it brings Joy to the righteous but terror to evildoers. 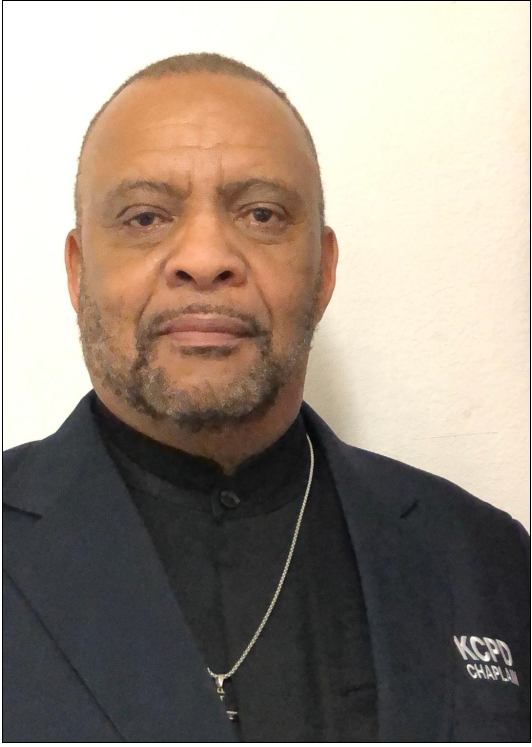 Rev. Jones is currently working on his Doctorate Dissertation of Eschatological Theology from The Sure Foundation Theological Institute, Seminole, FL. He is married to Deborah Townsend-Jones 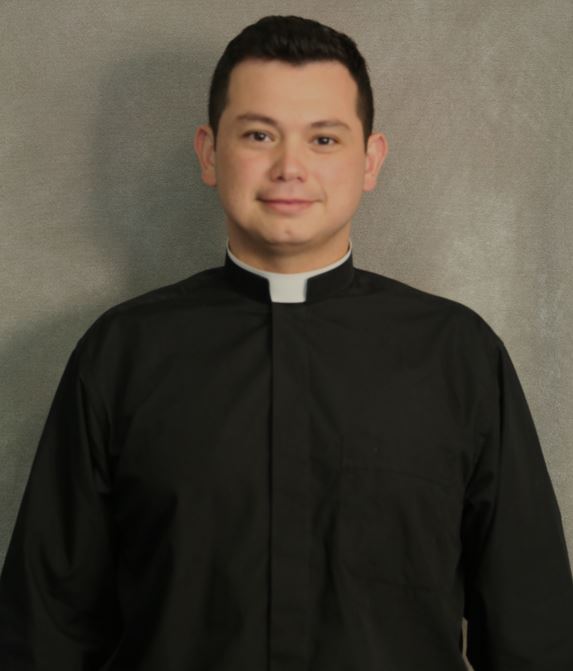 Father Andres Moreno is the Pastor of Saint Anthony Catholic Church in northeast Kansas City, and he is from Colombia South America;  the oldest among one brother and one sister. Father was ordained May 23, 2015, has a bachelor degree in Philosophy and a Master in Divinity and Master of Theology from Holy Apostles College and Seminary, and served as a Parochial Vicar at Our Lady of the Presentation in Lees Summit MO for two years, and became a pastor of Saint Anthony in 2017 until now and served as Police Chaplain since 2018. 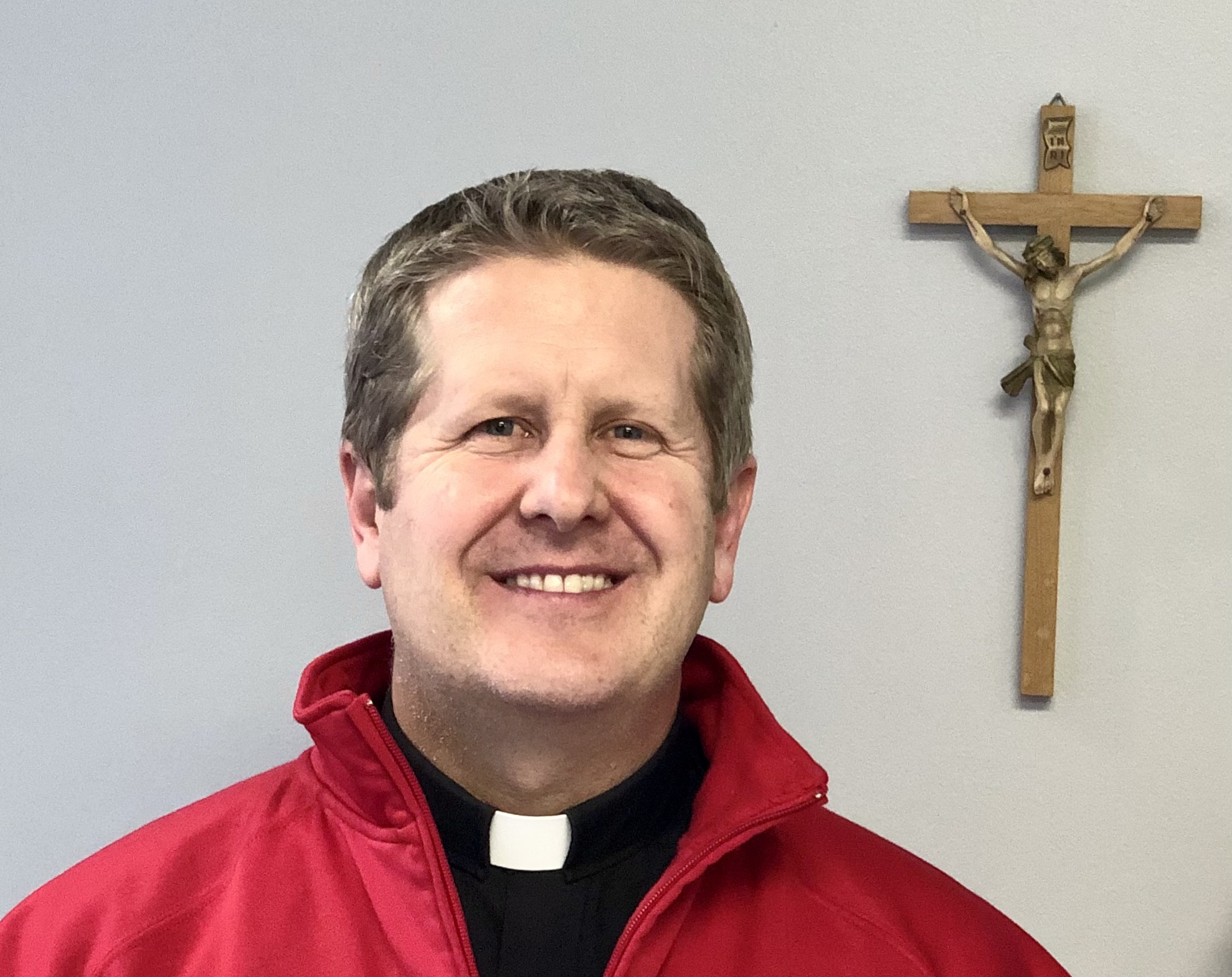 Father Sean McCaffery is currently a chaplain for the Kansas City Police Department at South Patrol.  He currently serves as Pastor at St. John Francis Regis Catholic Church & Academy in Kansas City, Missouri.  He has a great passion for sharing our Catholic faith especially through our Academy of 135 scholars from pre-school through 8th grade. Their goal is to help our young people develop a true sense of wonder and awe as they seek to grow in God’s Truth, Beauty and Goodness. Their hope for our Academy and Parish is to help people have an encounter and build a daily relationship with the Father, Son and Holy Spirit.  Another passion he has is for his parish to live the works of mercy in seeking to serve the poor, hungry, sick, lonely, depressed, the unborn, elderly, the immigrant, prisoner and all those most in need of God’s love and mercy.  Father McCaffery is excited to serve as a chaplain for our officers who each day put themselves out on the front line for our safety, security and the common good.  "I pray God will protect all our men and women in blue and their families!" 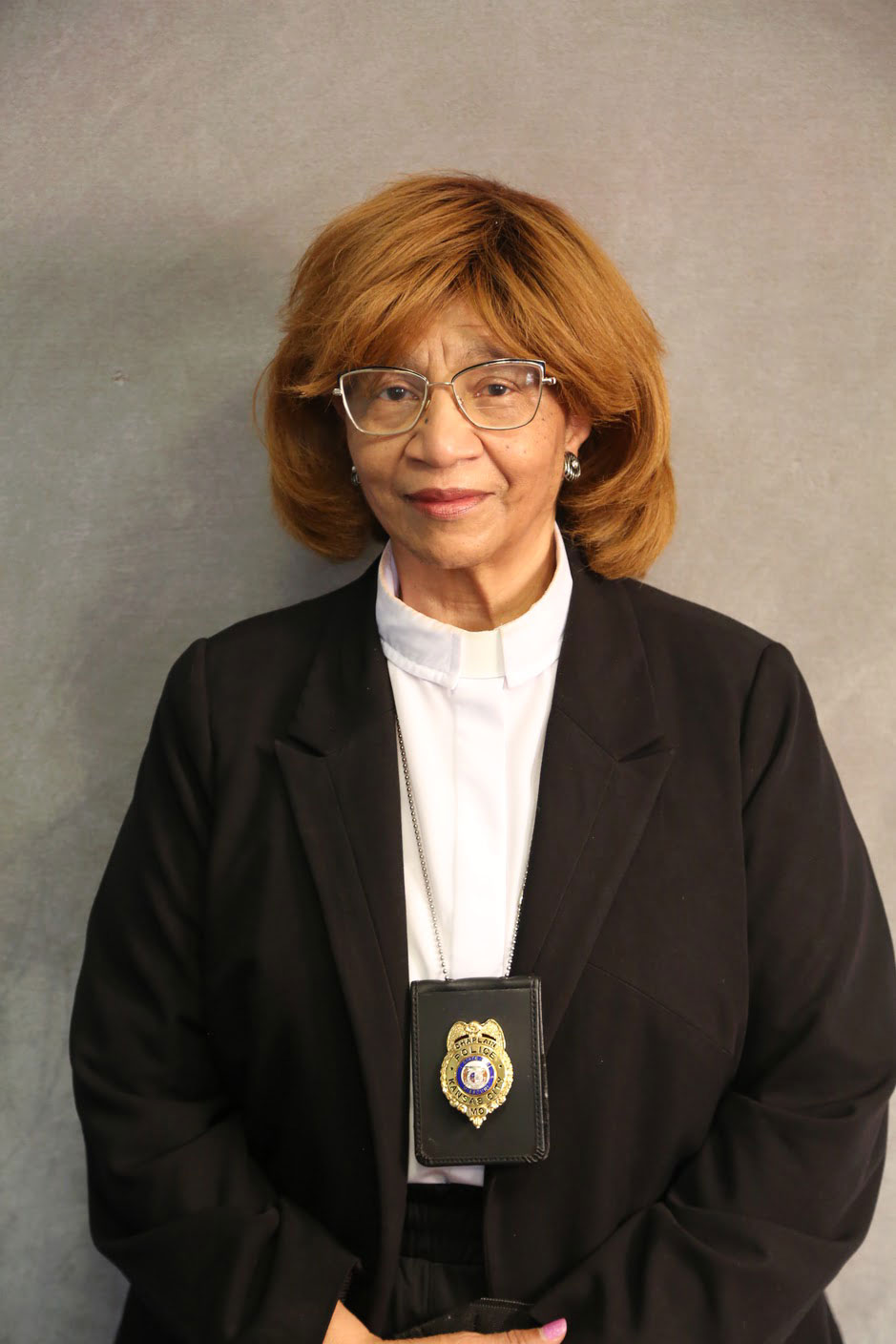 Rev. Brenda J Smith is honored and humbled to have the pleasure of serving as Chaplain to the East Patrol of the Kansas City Missouri Police Department.

Rev. Brenda J. Smith, is also the proud pastor of Gregg Tabernacle African Methodist Episcopal Church where she was assigned during the 12th Session of the Midwest Annual Conference of The African Methodist Episcopal Church in Kansas City, Missouri. Prior to being assigned to Gregg Tabernacle, she served as pastor of Gilbert Memorial AME Church in Kansas City, Missouri (2006), Ward Chapel Church in Richmond, Missouri (2000),  and St Luke AME Church in Norborne, Missouri (1994).            Rev. Smith is known for her ministry specializing in prayer, women's ministry, family dynamics, restoration and healing, and management training. She facilitated women’s retreats and revivals from Springfield, Missouri to Slater, Missouri and Wichita,  Kansas.

Rev. Smith was ordained an Itinerant Elder in the A.M.E. Church in 1994 upon completion of five years of examination by the AME Board of Examiners of the Midwest Conference. She received her Theological training at Heart of America Theological Seminary in Pastoral Science and Christian Education. Pastor Smith acquired a Bachelor of Science degree in Business Management in 2006 from the University of Phoenix,  KansasCity, Missouri. She is certified in Early Childhood Development and has earned 18 hours towards a Master's degree in Elementary Education at Park College. While teaching at St. Monica Catholic School, Smith received three summer fellowships to study Literacy at Columbia University in New York City, New York and two fellowships to study the Democratic Process at the University of Minnesota to enhance her leadership role in Public Achievement. She was recognized as “Outstanding Educator” by Central Missouri University in 2005.

Pastor Smith was certified by State of Missouri MAT Substance Abuse Peer Counseling in 2018, and Bookkeeping and Accounting from Reflections Technical Institution in 2019. She has completed numerous professional trainings and initiatives.

Chaplain Smith is a retired elementary teacher who taught twelve years at St. Monica Catholic School and ten years at Della Lamb Elementary Charter School of Kansas City.  She is a native of the Greater Kansas City Area, and has always involved herself in “Help” Ministries and community outreach.  She has a deep respect and care for our men and women in Blue and feels privileged to serve them. 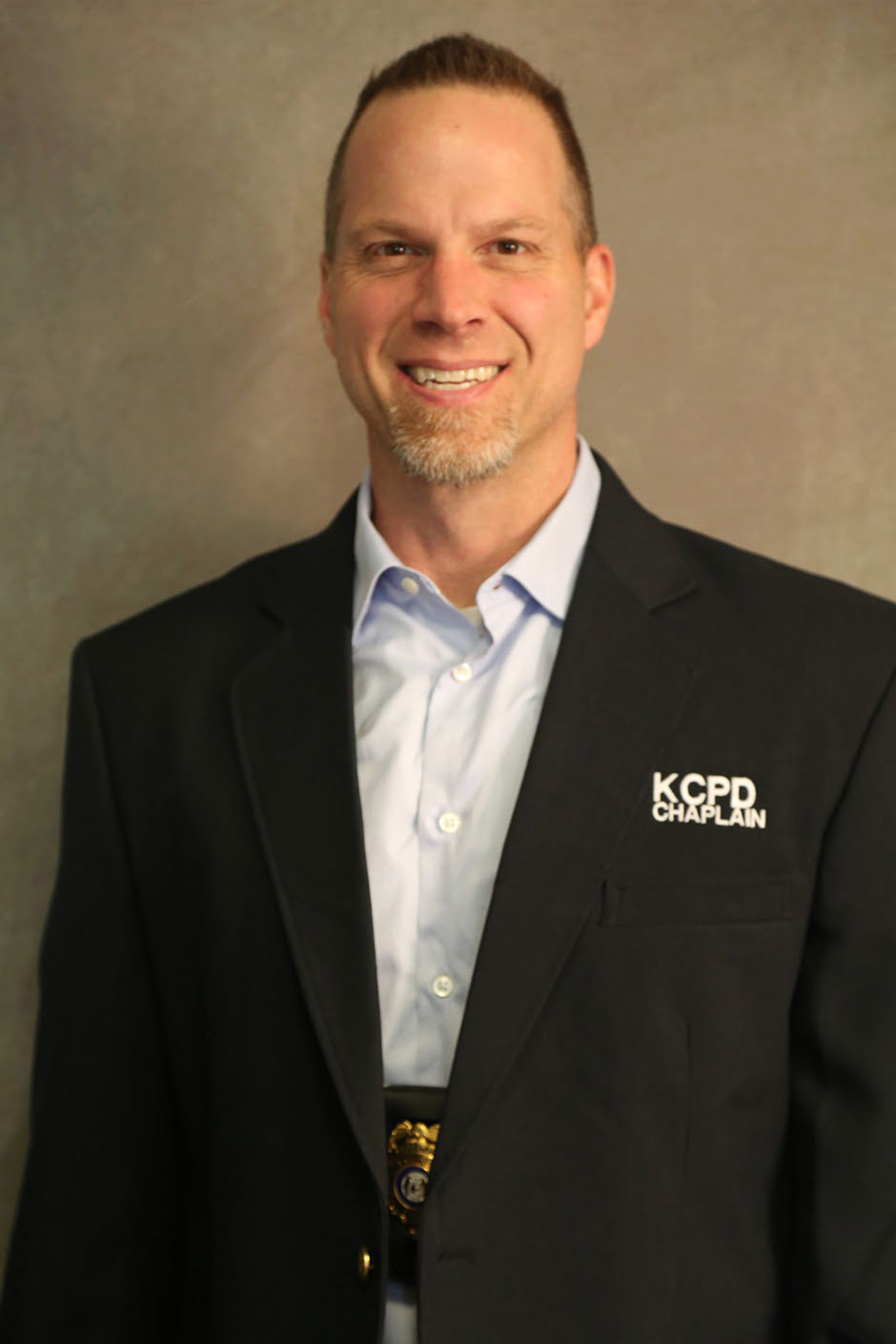 Todd Fleury has been serving as a pastor to teens and adults alike since 1994. He currently serves as the Associate Pastor of Evangel Church in Kansas City, overseeing the Discipleship team of pastors as well as the Men's Ministry. When he isn't busy with his responsibilities at the church, you can usually find him cheering on one of his 5 children or spending time with his beautiful wife, Deb.

Todd loves that the first disciples Jesus called to do ministry were fishermen. He loves to fish and has a side hobby/business making and selling muskie lures. He's most in his element on a boat with a reel in his hand, and when he can combine that with ministry or spending time with his family, that's about as perfect as it can get.

While he is relatively new to KCPD, Todd is honored to serve as a chaplain and has a tremendous amount of respect for the selfless love and service our first responders show for our communities. 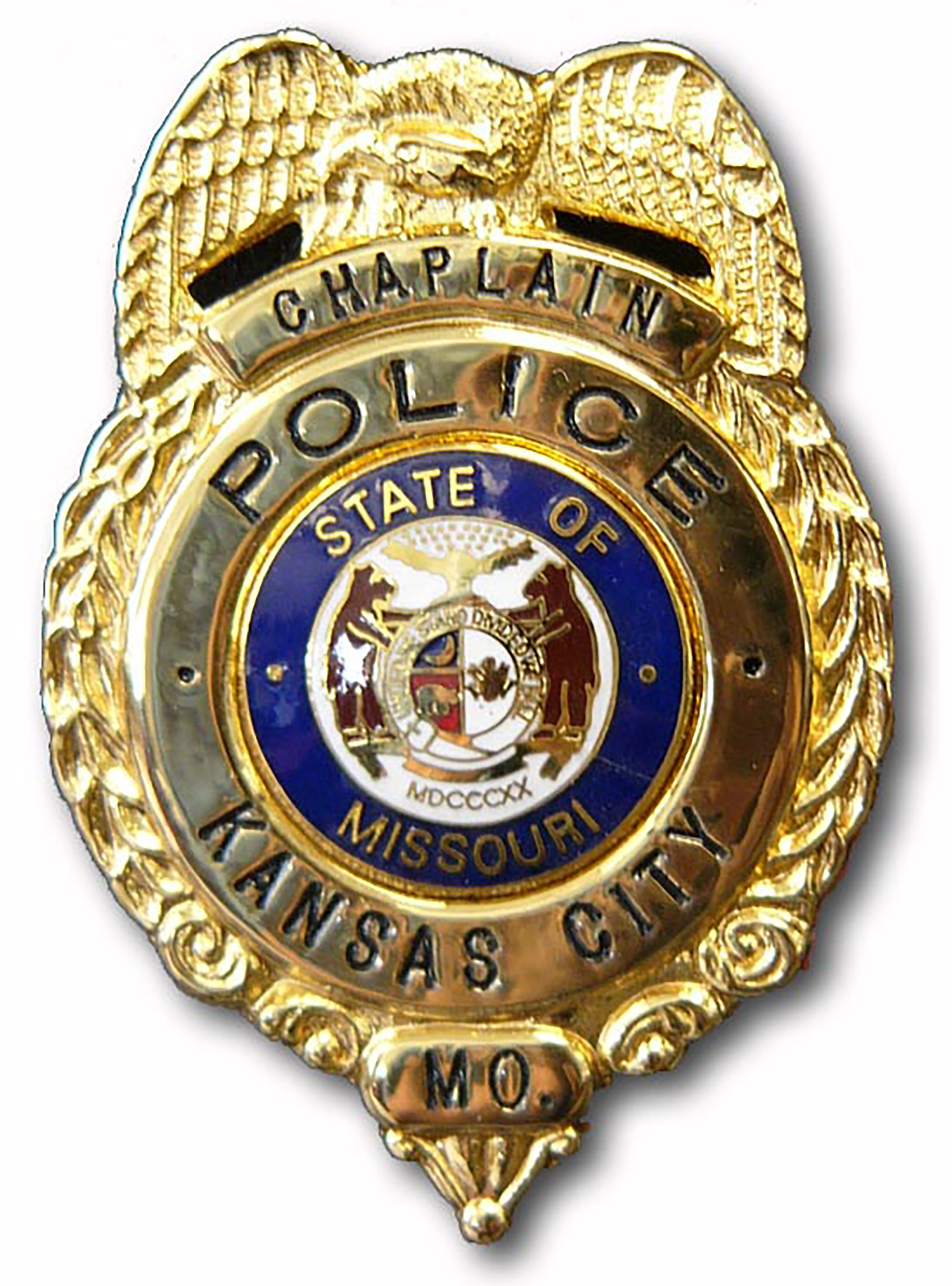