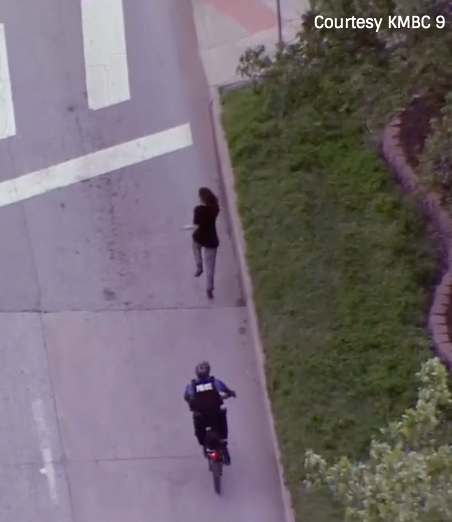 A pursuit that started on four wheels ended on two.

Just after 5 p.m. May 8, police saw a vehicle that had been taken in an earlier carjacking and attempted to stop it at Independence Avenue and Brooklyn. The vehicle's driver refused to stop, and officers began to pursue it. The driver continued to flee onto the interstate. At I-35 and Front Street, officers deployed Stop Sticks, which the driver struck. Just south of that location, the suspect vehicle struck two other vehicles but kept going. One person in one of those cars was transported to the hospital by ambulance with non-life-threatening injuries.

With flattened tires, the fleeing driver eventually came to a stop near Independence Avenue and Delaware in the River Market neighborhood. She got out of the vehicle - which was still in gear and rolling away - and took off running. The first officer to get behind her was one of KCPD's Bike Patrol officers, which are based downtown. He had heard the pursuit coming on the radio and got into position to see if he could be of assistance. On his bike, he quickly caught up to the suspect who was running on foot and took her safely into custody.

The 18-year-old female suspect has been charged with resisting arrest and leaving the scene of an accident.