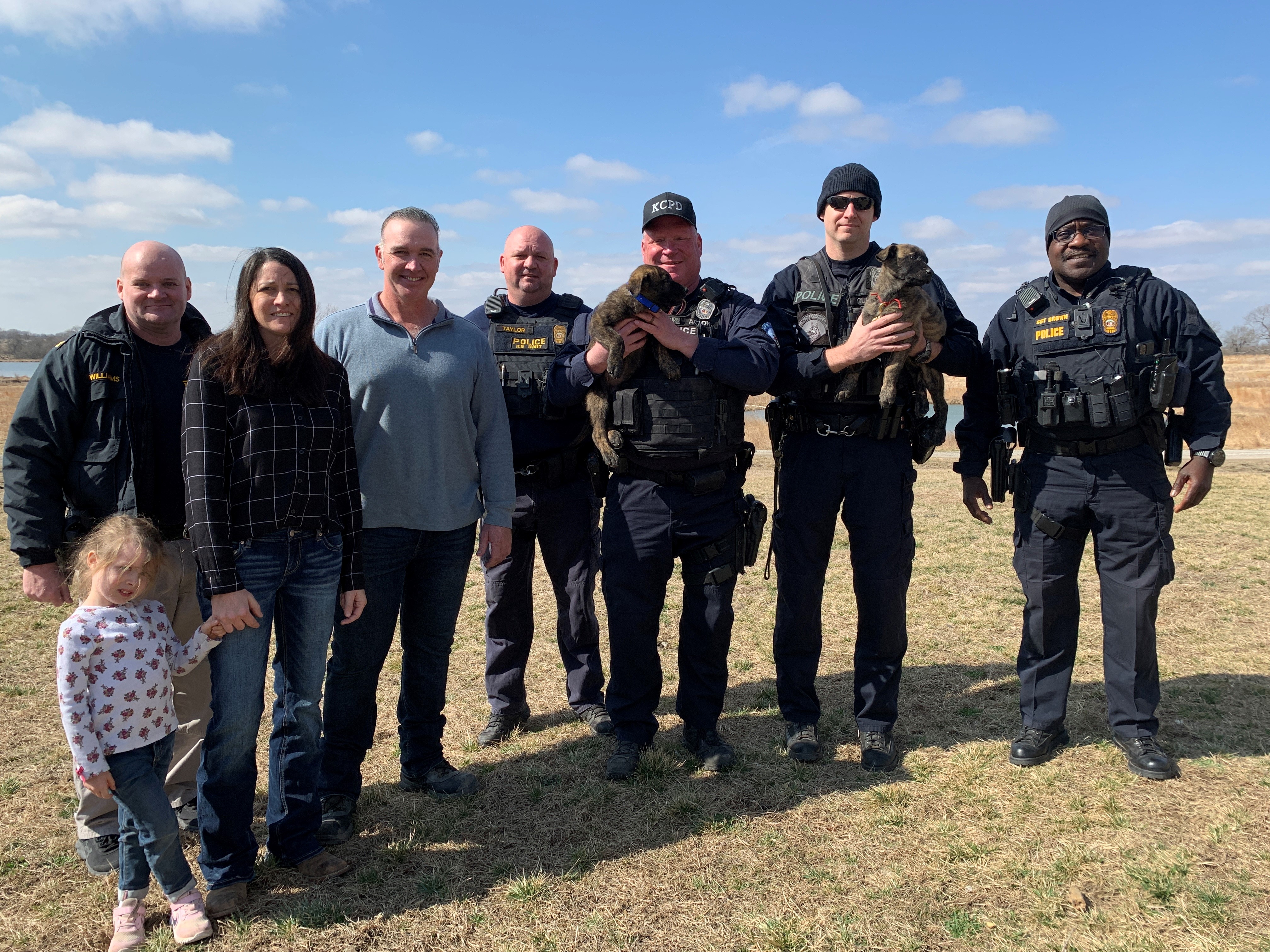 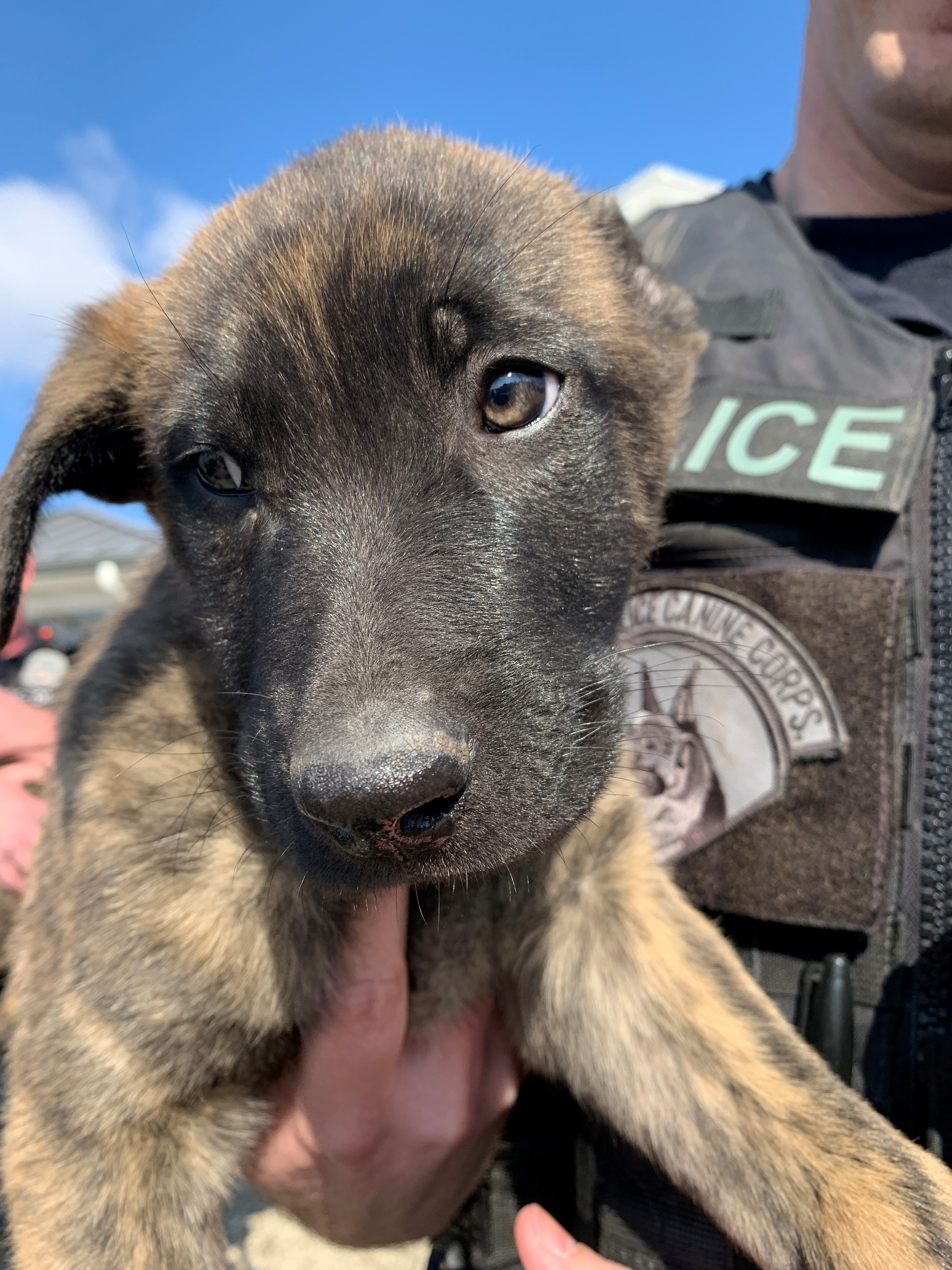 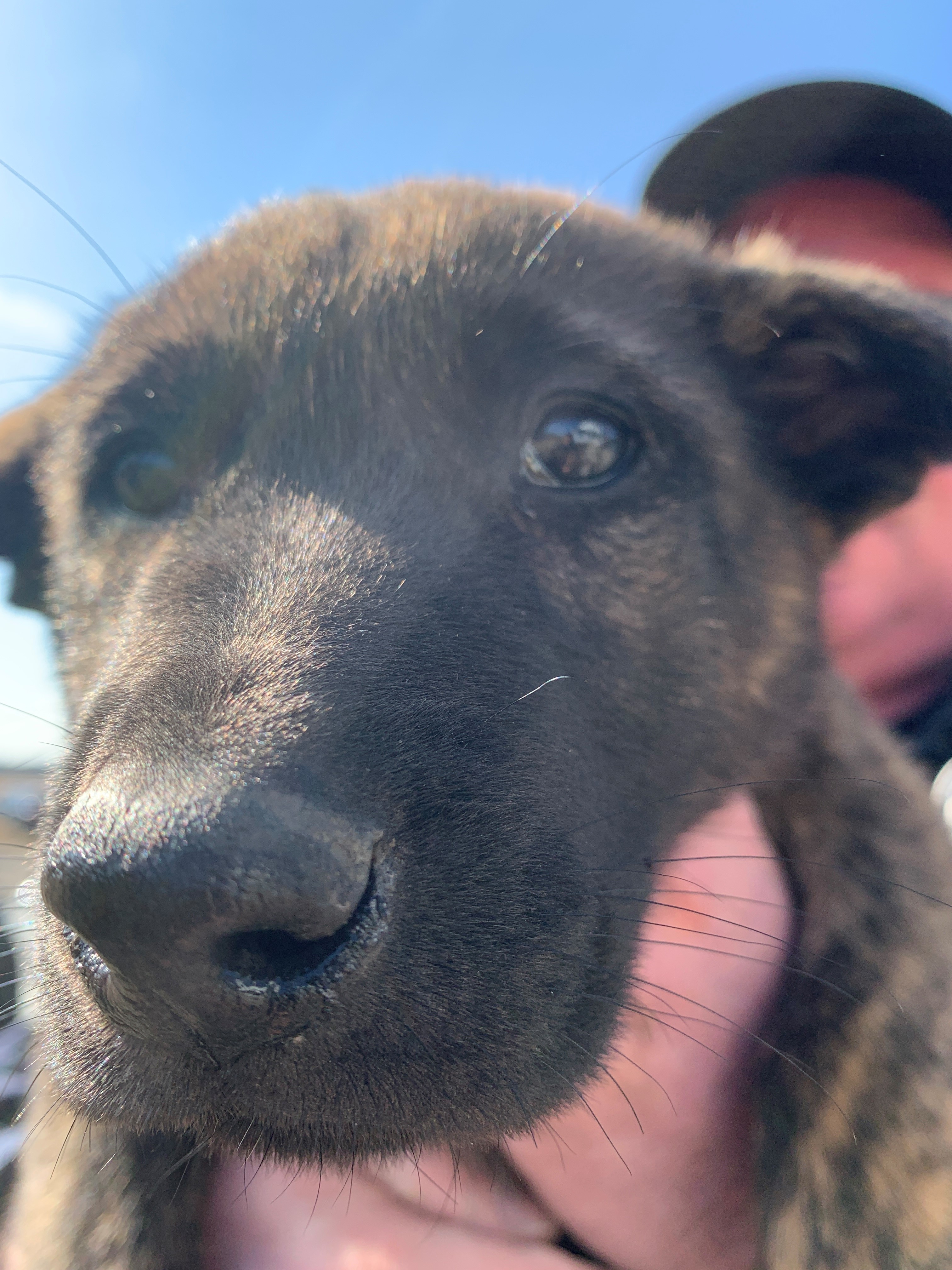 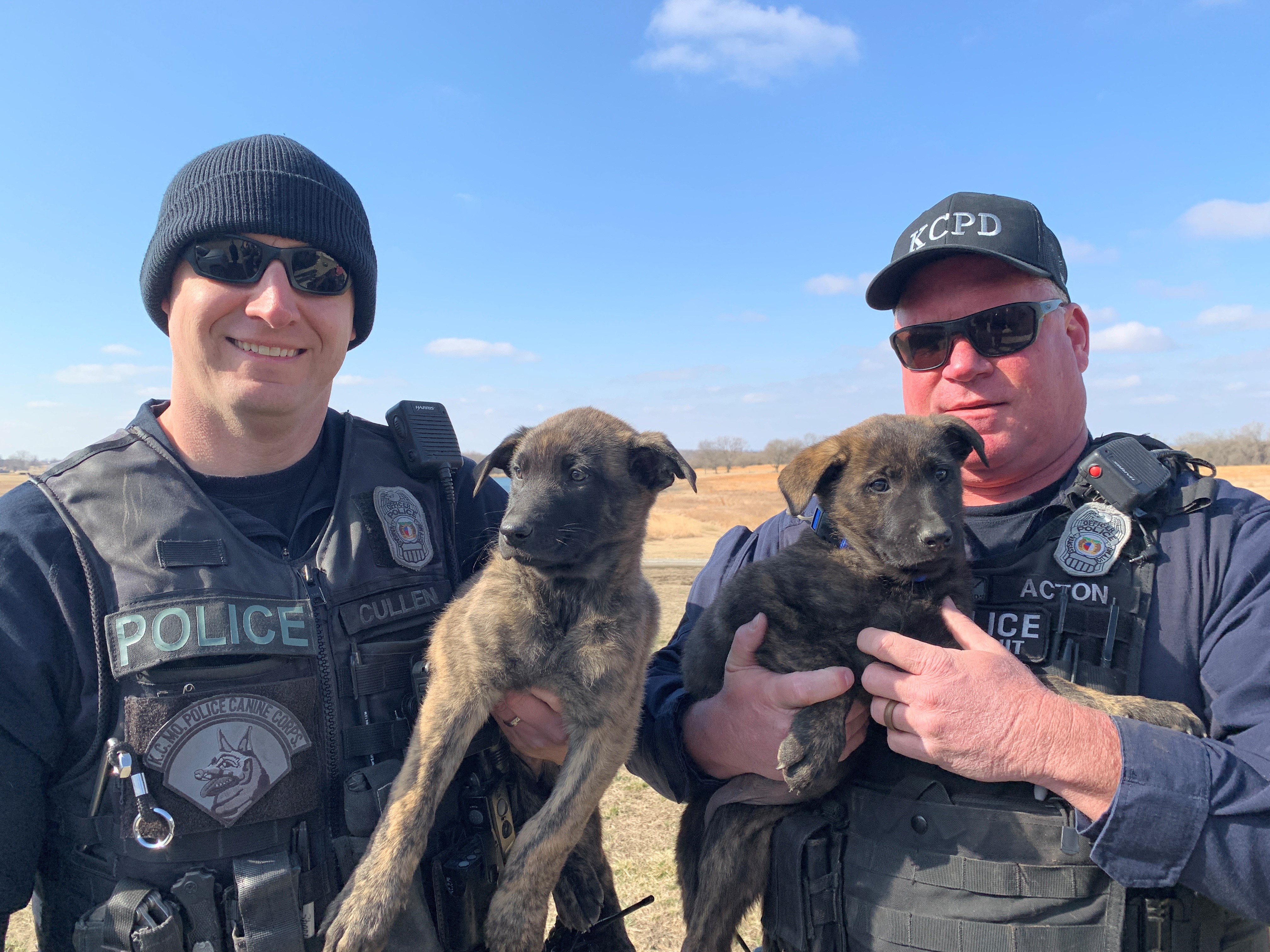 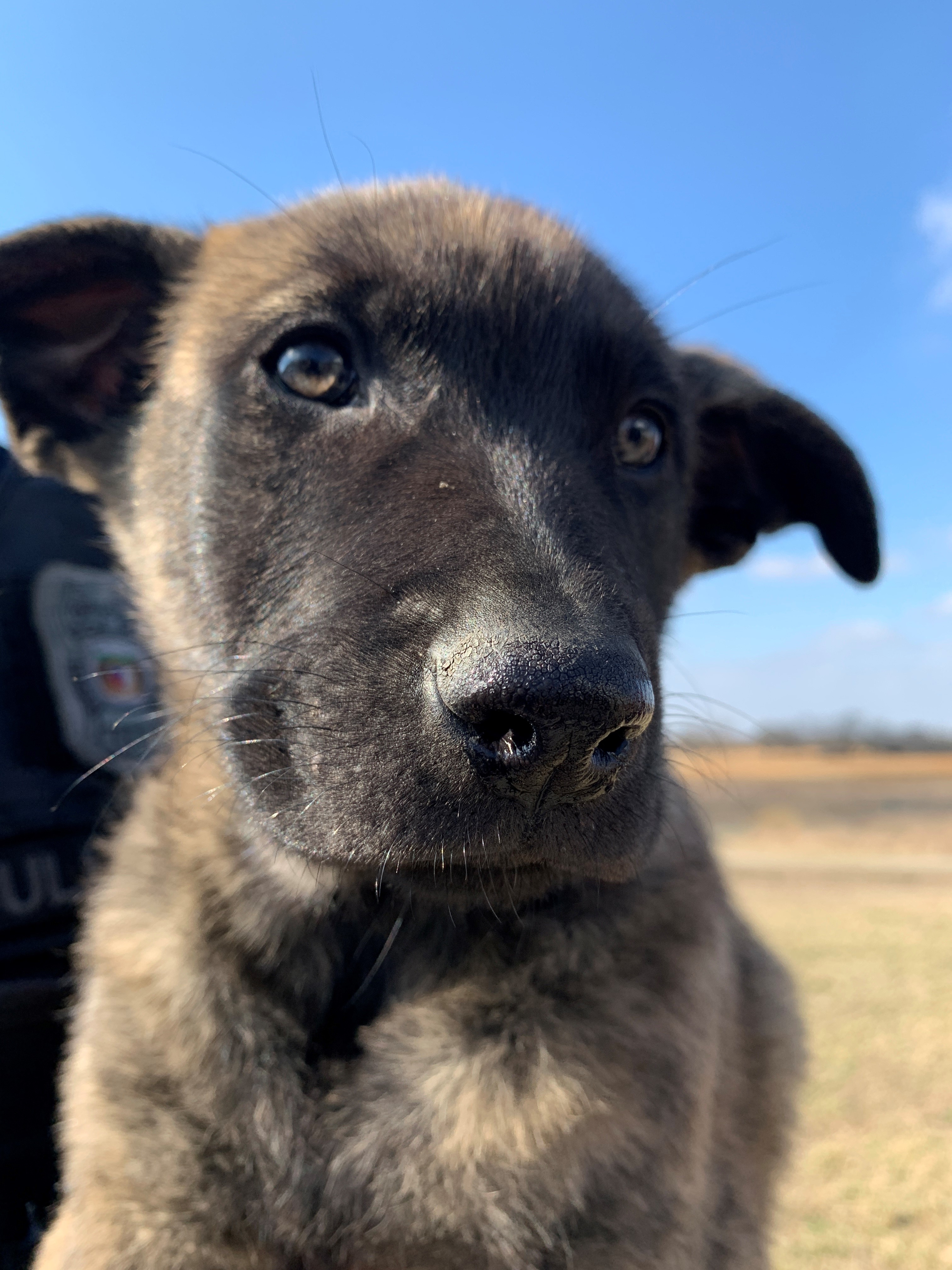 Erin Seyfrid picked up the phone and called KCPD out of the blue. The Paola, Kan., resident left a voicemail offering something unusual- a Dutch Shepherd puppy.

“I was surprised,” recalls Sergeant Matt Taylor, who returned Seyfrid’s call the very next day.

Seyfrid and her boyfriend, David Meyers, had a litter of six-week-old puppies. Understanding the breed’s intelligence, agility, and nature to guard, the couple believed its pups had a higher service.

The first step was for the K-9 Unit to meet the puppies. As this was taking place, a law enforcement agency that Seyfrid and Meyers also offered a puppy to backed out. The couple then offered KCPD two Dutch Shepherds.

For several months prior to the offer, KCPD investigated the creation of a puppy program. It would bolster the department’s K-9 Unit at a much lower cost ($2,000-3,000 per puppy) than buying an older dog with introductory law enforcement training.

Typically, KCPD’s K-9 Unit spends $13,000-$15,000 for a dog it believes will make it into the Unit as an officer. The dogs are about 2-years-old, come from overseas, and get preliminary training from a company in Houston. Members from the K-9 Unit travel to Houston, spending about a week with the dogs (German Shepherds, Belgian Malinois, or Dutch Shepherds) to assess which dogs best suit their needs. They select one and bring it back to Kansas City to receive intensive law enforcement training.

At that first meeting, the K-9 Unit ran the couple’s litter through some tests looking for the alpha dogs. They believe they’ve found them in sisters, Raven and Josie.

Raven is living with Officer John Cullen and his family. Officer Cullen teams with a 10-year-old dog in the K-9 Unit who will likely retire in 8-12 months. After retirement, the hope is that Raven will be trained, certified, and ready to work with Officer Cullen.

Meanwhile, Josie will be living with Officer Yale Acton and his family. Officer Acton is currently teamed with a 4-year-old dog in the Unit and will foster Josie for another officer. When that officer’s dog retires in about a year, Josie will then go to that officer.

In agreement, the K-9 officers say the biggest benefit of receiving these puppies at only 8-weeks-old is the bonding that will take place.

“We’re going to rely on them to perform a job,” states Cullen. “If we have a strong bond, we have respect for each other. If you don’t have the bond, the dog won’t listen or care. Plus socializing at this age with the family is huge.”

Raven and Josie are too young to undergo KCPD’s standard training. Until they’re a year old, they will learn the basics.

Receiving these puppies at a young age is beneficial, but it’s no guarantee they’ll make the K-9 Unit. It’s simply a great head start.

“I’m pretty positive they’ll pass the detection side,” states Sergeant Taylor. “Patrol side is tougher. Can they search and track a suspect? They do multiple searches for investigative units looking for guns and cell phones we may need as evidence.”

As for Seyfrid and Meyers, KCPD will keep them up-to-date with how Raven and Josie are doing. It’s the first time the couple has donated their dogs to law enforcement, but maybe not the last. They think this type of puppy donation might be a future recurrence.