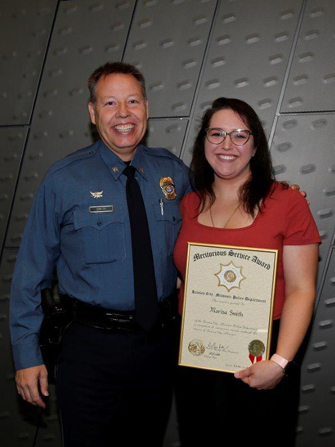 A Crime Scene investigator with a heart for victims of sexual assault was honored today for a program she started that compelled people from around the world to help.

In December 2017, Marisa Smith recognized that when she was sent to a sexual assault scene as a crime scene technician, she often had to take the victim’s bed sheets for evidence. More times than not, these would be the only sheets the victim would have, compounding the hurt of someone already suffering from sexual assault.

Smith knew she could buy a few sheets to keep on-hand at the lab, but she also realized it was not sustainable on her own. In July 2018, she met with the department’s victim advocate and department social workers to get the word out for people in the community to bring in new bed sheets to any department station.

When the department posted about the program on Facebook in September 2018, it quickly went viral, reaching 1.5 million people. A commenter from Florida suggested Smith create an Amazon Wish List for those not living in Kansas City to be able to donate. Through the wish list, the supplies could be purchased from anywhere and delivered straight to the crime lab. Smith even went through the steps to have the program certified as a 501(c)(3) entity, so donations would be tax-deductible. Sheets and bedding flowed in from generous donors across the U.S. and from foreign countries.

The post is still recirculating on Facebook over a year later. As a result, the storage in the Crime Lab for the sheets has reached capacity several times over. Smith has been able to share sheets with other local agencies and takes referrals from the Metropolitan Organization to Counter Sexual Assault (MOCSA) to take sheets to victims. Smith has also shared with numerous departments how they can begin a program of their own. The response was not only overwhelming, it has created a way for the community and the Department to partner together to tangibly help victims.