KCPD, domestic violence agencies celebrate a decade of getting victims to safety through "ground-breaking" program 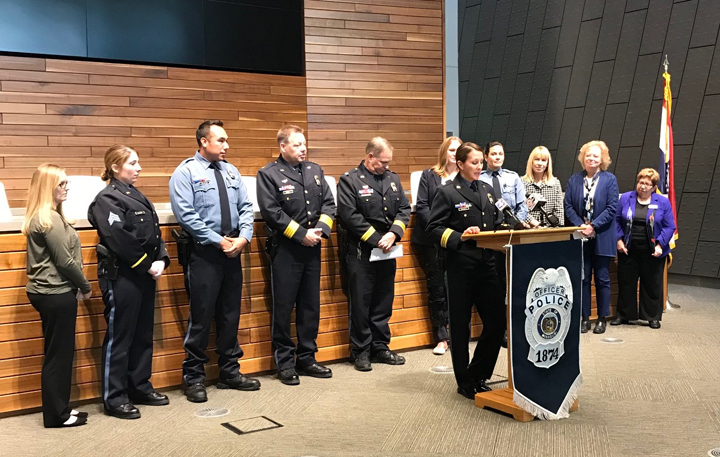 A pioneering partnership between the Kansas City Missouri Police Department and domestic violence service providers has gotten thousands of families to safety over the past decade.

The KCPD, Rose Brooks Center and Synergy Services celebrated the 10th anniversary of the Lethality Assessment Protocol, or LAP, on Oct. 21. To date, more than 20,000 victims of domestic violence, at highest risk of being murdered, have been connected to violence prevention services because of this program.

“About 200 cities have adopted this since Kansas City has,” Synergy Executive Director Robin Winner said. “We were groundbreakers.”

“We were the first major city police department to do this department-wide,” said Major Mark Folsom, who implemented LAP at KCPD, working alongside Rose Brooks and Synergy.

In the 10 years since LAP started in Kansas City, officers have completed 29,731 screens. A total of 21,690 – or 73 percent – screened in at high danger. Only seven of the victims who screened in as high danger have been killed in the last decade, marking just 0.0002 percent of all those screened.

Rose Brooks CEO Susan Miller said of the 9,986 hotline calls their center received in 2018, 2,623 of them were made directly by KCPD officers at the scene. Of those calls, 76% of the victims said they had been choked by their partner.

“We are saving the lives of women and children,” Miller said.

Since its success in Kansas City, Major Folsom and Rose Brooks Chief Operating Officer Lisa Fleming have gone around the country to train other police departments and domestic violence agencies in implementing LAP. October is Domestic Violence Awareness Month, and KCPD is proud to celebrate 10 years of LAP in Kansas City and the potentially thousands of lives it has saved.