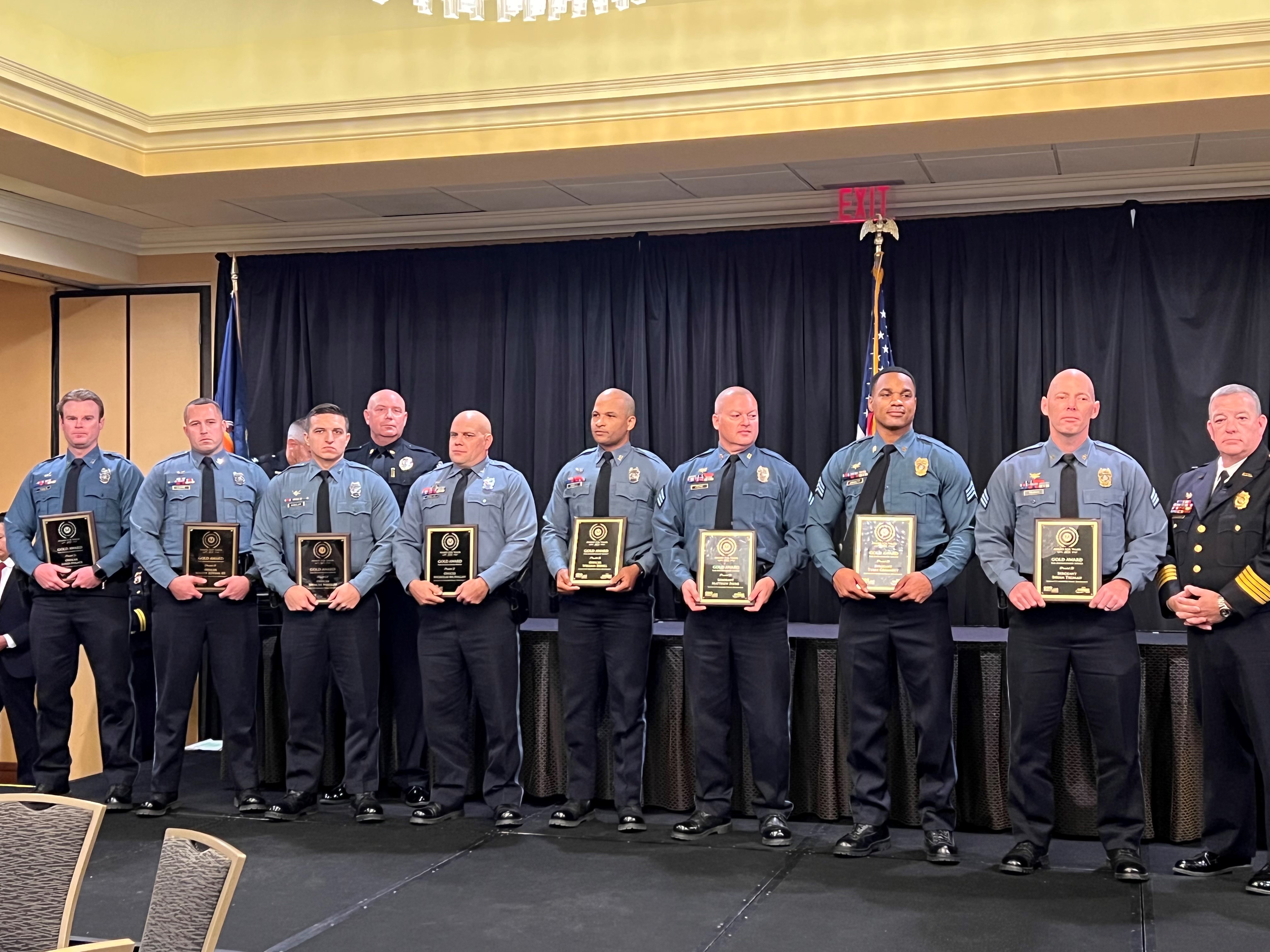 The officers received the awards at the 50th Annual Awards for Valor presented by the Metropolitan Chiefs and Sheriffs Association.

Shortly after 9 a.m. on April 10, several officers responded to a call for a shooting on Norton Avenue near 45th Street.

When they arrived, officers met a woman at the front door who had been shot in the stomach by her children’s father.

Escorting the woman away from the house, officers learned that the children’s father had spent the night at her home, had been excessively using drugs and alcohol, and had been acting very paranoid.

The woman told officers she went to her children’s bedroom that morning where the children and suspect were sleeping. After repeated attempts to open the door, the suspect fired gunshots at her, striking her once. The mother eventually laid on the living room floor telling her kids she loved them and could hear them yelling, “Momma!”

The woman told officers the suspect now had her two children upstairs, barricaded in a bedroom, armed with a 9-millimeter handgun. TAC teams responded for what was now an Operation 100 involving an armed violent shooting suspect who had taken two children hostage.

At 11:22 a.m., officers heard two gunshots from inside the residence. Fearing the suspect had just shot the two children, the TAC 20 Squad quickly made entry to rescue them. Another shot rang out. Under great stress, Sergeant Bryan Truman communicated to Sergeant Matthew Payne to fire less-lethal baton rounds into the upstairs windows to provide a distraction.

Sergeant Payne created the distraction, allowing members from TAC 20 to make their way upstairs. Once there, they spotted a barricaded door where they believed the hostages were located. When Sergeant Payne again fired the less-lethal rounds, Officer Nicholas McNallan attempted to breach the bedroom door with a battering ram. As he was doing so, the suspect began firing shots through the door and wall at officers. TAC 20 Squad members grabbed Officer McNallan, pulling him out of the way of gunfire. Sergeant Truman, Officer McNallan, and Officer Jared Fugate were pinned on the stairs and continued to retreat down while rounds were penetrating the wall above their heads.

A flashbang and more gas were deployed as the suspect continued firing at officers. For 11 minutes, the suspect sporadically shot through the bedroom door, walls, and window at officers.

At 11:49 a.m., officers could hear the children coughing. While the suspect was distracted by gas being deployed, the officers instructed the children to leave the bedroom. They climbed over obstacles and crawled through a broken door to get out. Sergeant Truman saw a child struggling to breathe, picked her up, and quickly took her outside. Officer Fugate simultaneously escorted the other child to safety.

The suspect fired additional shots at the four officers bunkered in the bedroom. Using a ladder, Officer Beddell, Sergeant Grimmett, Officer Loving, and Officer Wheeler escaped through a window and regrouped with the rest of their TAC Squad despite being under fire.

The suspect continued to shoot at random for almost two hours after the initial shot. After the one, Sergeant Payne deployed a can of gas inside the suspect’s bedroom and less than a minute later, the suspect jumped onto the roof with his firearm in hand. He laid the firearm in a gutter and was eventually taken into custody.

Several rounds shot by the suspect hit the neighboring home where a woman and two children were residing prior to being evacuated. The number of bullet holes in various walls and doors was “hair raising.”

Without hesitation, these officers entered a residence during active gunfire to save children from an armed violent suspect. Once inside, they continued to receive gunfire and were able to rescue the children without harm.