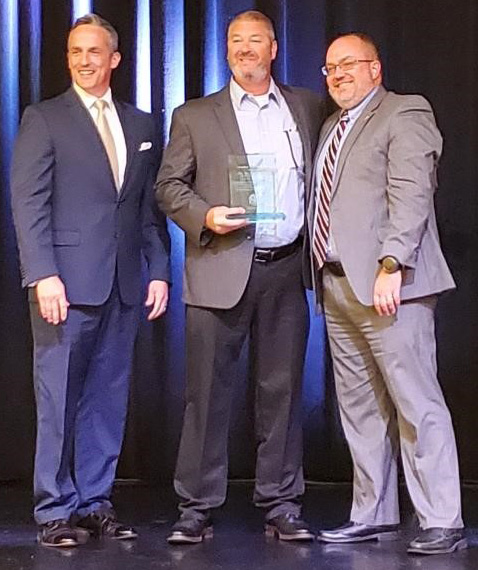 Tim Garrison, United States Attorney for the Western District of Missouri, announced Aug. 27 that KCPD Sergeant Eric Greenwell was one of the 2019 Guardian of Justice Award winners, along with FBI Special Agent Jason Ramsey. They were honored on Aug. 15 during the 17th Annual Law Enforcement Coordinating Committee Training Seminar in Springfield, Missouri. (Sergeant Greenwell is pictured above in the middle with Garrison on the left and Deputy Criminal Chief Jeff Valenti of the office of U.S. Attorney for the Western District of Missouri on the right.)

Sergeant Greenwell has been the supervisor of the KCPD's Career Criminal Task Force for nearly two decades. This squad is tasked with investigating the worst-of-the-worst, recidivistic offenders in the metropolitan area. The offenses the unit investigates include rape, robbery, assault, gang shootings, drug trafficking, armed robbery, and murder. This unit is unique because it is made up not only of police officers, but multiple federal agents that work under Greenwell’s supervision. The work done by this unit has resulted in countless prosecutions that have benefited the welfare and safety of the community.

This task force, in conjunction with the FBI, has aggressively targeted subjects involved in armed robberies at local businesses, resulting in 24 federal indictments in the last fiscal year. This places the Kansas City’s initiative fifth in the nation for such indictments. Among those cases was a five-member crew involved in multiple takeover-style robberies of 7-Eleven stores and other businesses. This crew operated by finding two locations next to each other and then simultaneously robbing them both. They did so by shooting out the business windows and holding the employees at gunpoint while demanding money from the business. Another crew robbed taxi drivers, including a 53-year-old Z-Trip driver who refused to give up her money and was shot 18 times with an assault rifle. She survived. Another investigation targeted two separate crews who coordinated their robberies of cell phone stores. The violent groups, which stole iPhones, pistol whipped multiple store employees and beat customers. Members of the group were connected to homicides and shootings. Another five-member crew was involved in 11 violent takeover-style armed robberies of local businesses. In one of those robberies, a convenience store clerk was shot and killed. Another six-member crew was involved in 26 armed takeover-style business robberies. While attempting to rob a pharmacy, the crew’s leader was shot and killed in a gun battle with law enforcement officers.

The Career Criminal Task Force coordinated the effort of the Kansas City Police Department and the FBI to identify and arrest a suspect in the murder of seven victims on or around the Indian Creek Trail in Kansas City. Greenwell’s task force also has been involved in several murder cases that have been charged in federal court. Greenwell also coordinated the investigations into nine missing and/or abducted children. Seven of these children were recovered, including a kidnapped infant who was taken from Kansas City to California.

The annual Guardian of Justice Award recognizes a state or local officer as well as a federal agent for investigative excellence, selfless collaboration, tireless trial support, commendable diligence and professionalism, and noteworthy assistance to prosecution. The prestigious law enforcement award is presented by the U.S. Attorney’s Office each year during the law enforcement training conference.