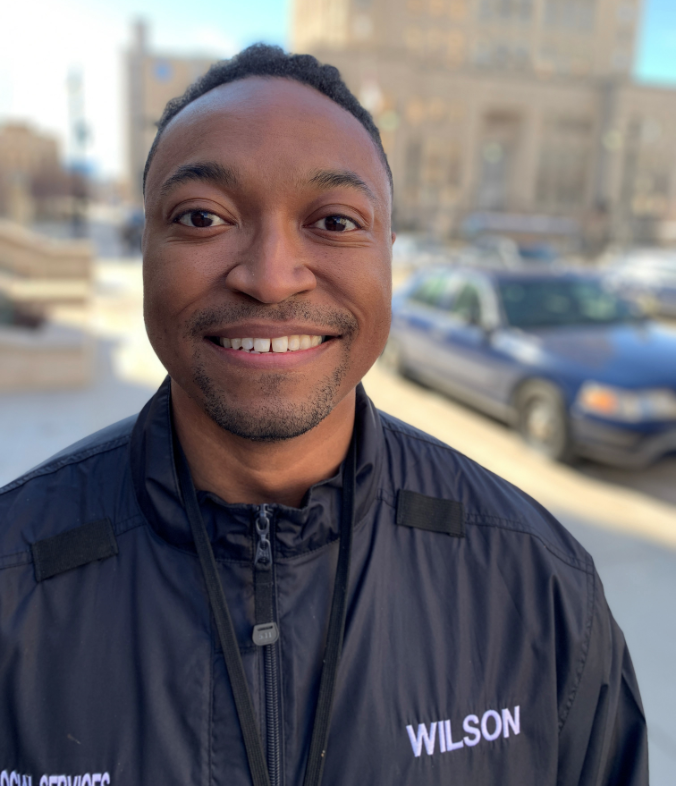 Kevin Wilson majored in criminal justice, and his uncle was a KCPD officer, yet…

When he was 16, Wilson was driving in Kansas looking for a party. He parked in the police department’s parking lot to figure out directions. Driving away, Wilson made a wrong turn, and within minutes he was in handcuffs. Thankfully, a second officer arrived to defuse the situation and remove the handcuffs.

In his 20s, Wilson worked in Oklahoma, and one night, driving with his co-worker, an officer pulled him over.

The officer was looking for an assault suspect that didn’t fit Wilson’s description. “It’s because you’re black,” Wilson says the officer told him. The stop wrapped up quickly, but Wilson felt sour about what happened. Eventually, he thought more about these experiences.

“How do I prevent other kids who are black and brown from feeling the way I did?” Wilson asks. “It’s by treating them as people, and that’s what motivated me back to law enforcement.”

While in Oklahoma, he provided social services to offender populations. He also worked in Kansas City, Kan., at a community mental health center. Wilson’s work was so impactful, KCK officers tried recruiting him to join their department.

But Wilson’s uncle, who served at KCPD and Gladstone PD, highly recommended KCPD, and KCMO is where Wilson wanted to serve.

Today, Wilson is a social service specialist at East Patrol Division. He routinely rides with officers on calls and “fills in the gaps.”

That means Wilson might help someone find a job, find a home, or solve a problem with a neighbor. He’s quickly learned how to understand and help emotionally distressed people. Oftentimes, Wilson’s work means following up with victims in the aftermaths of crimes.

While Wilson enjoys riding with officers, he plans to be one at some point. Wilson enrolled in the police academy with plans to be a KCPD officer. But a medical issue at the time prevented him from continuing in the academy.

Instead of leaving law enforcement, a solution evolved: to use Wilson’s social work background at East Patrol.

It’s been a great experience for Wilson, who will now have the knowledge of seeing what police officers face and how they interact in the community before he returns to the academy.

Until that day, Wilson is happy providing social services. Officers send him referrals when they come upon families in need, while people in the community now ask for Wilson by name.

Recently, Wilson has been helping a teenager, who has not been getting support from his family, stay in school, prepare for college, and find a job.

“We will help with any way we can,” Wilson states. “We will check on you. We’re absolutely here to assist and point you where to go.”

KCPD’s social services plan provides for a social worker at each of the six patrol stations and a supervisor when fully staffed. If you want to serve like Wilson, visit our careers page for opportunities - https://careers.kcpd.org.