This year in the month of June alone, KCPD 911 call-takers handled 28,817 calls. Around 270 of those calls came in from citizens who do not use English as their preferred language. With the help of Language Line Solutions, a program that is contracted through the Mid-American Regional Council, KCPD 911 call-takers are able to bring a translator on the phone to assist with calls for service. Language Line offers translators that can speak up to 140 different languages. KCPD has a small group of call-takers and dispatchers who are bilingual, but the language line is beneficial as it is available 24 hours a day, 7 days a week just like 911. KCPD has used a translation service like Language Line since the late 1980’s. Patrol Officers and Detectives also have access to the Language Line if they experience challenges due to language barriers. 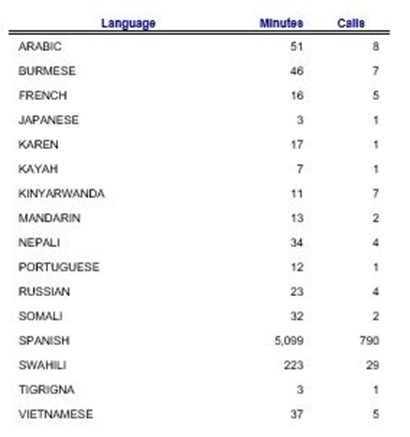 This chart shows all of the calls that required the Language Line from multiple law enforcement agencies in Missouri and Kansas for the month of June. You can see Spanish is the most requested, followed by Swahili. And no, “Karen” is not named after a person. It is a language that is mainly used in Thailand and is also known as S'gaw. KCPD call-takers assisted with translators on calls for service in over 9 different languages. With a service like Language Line, we are happy to implement this resource here in the KCPD Communications Unit to better serve the citizens of Kansas City and giving them comfortable access to emergency services.