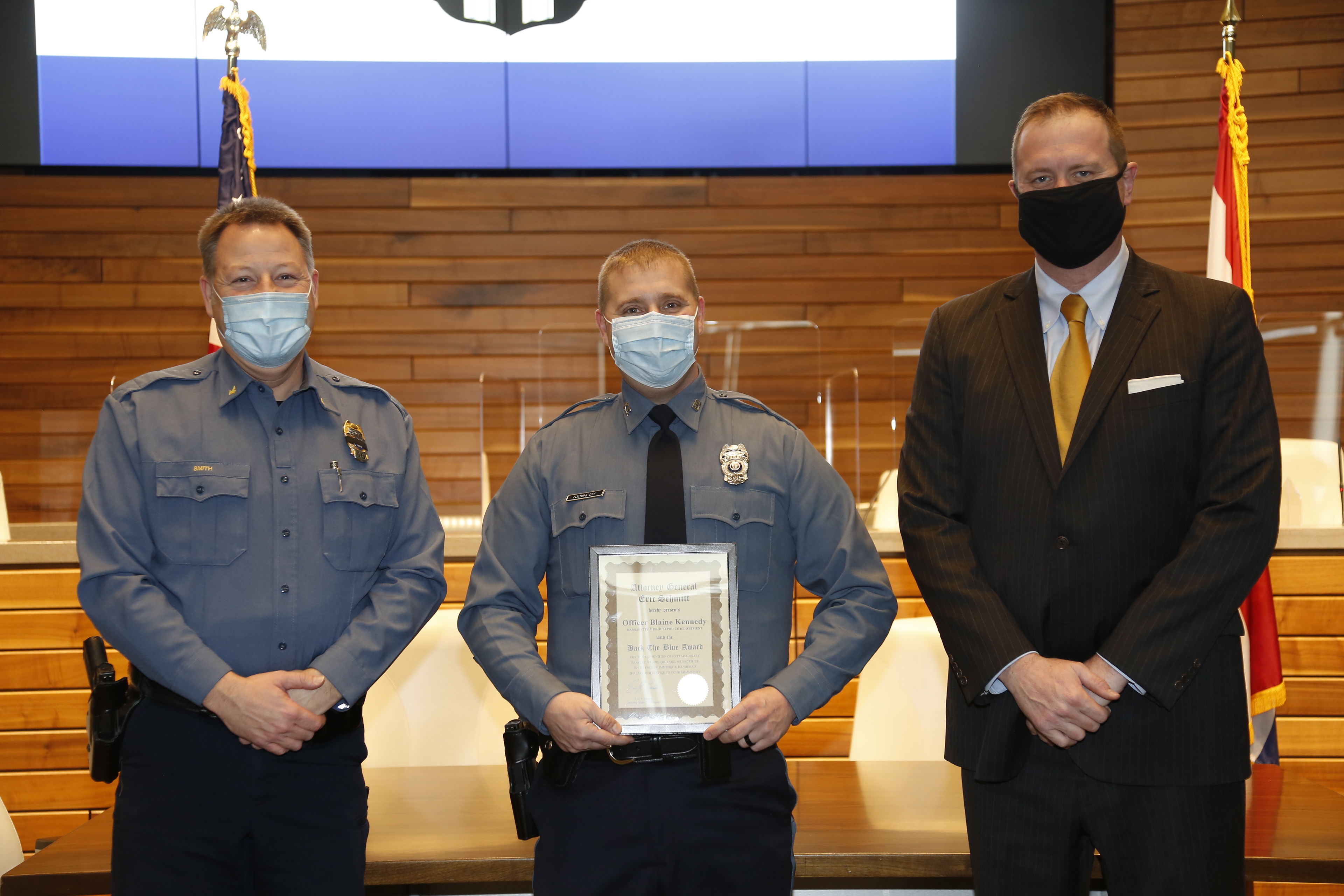 A KCPD officer received recognition today from the Missouri Attorney General for his extraordinary courage and valor in the line of duty last June.

“The day Blaine Kennedy was stabbed – June 3, 2020 – most people in Kansas City were focusing their attention on civil unrest on the Plaza,” Chief Richard Smith said. “They were unaware that a downtown KCPD Bike Patrol officer nearly lost his life trying to get help for a suicidal individual. As protestors around the nation called for police to use de-escalation techniques for people in mental health crisis, Officer Kennedy was doing exactly that. Even after he was stabbed, Officer Kennedy managed to chase the suspect and help get him safely into custody. His dedication to duty and protecting the people of Kansas City is an inspiration to all of us.”

Attorney General Eric Schmitt presented his Office’s Back the Blue Award to Officer Kennedy on Feb. 4 at KCPD Headquarters.

“Missouri’s law enforcement officers put their lives on the line every single day for the safety and sanctity of the communities they’ve sworn to protect. Law enforcement officers leave for work every single day not knowing if they’ll make it back to their families at night,” Attorney General Schmitt said. “Officer Kennedy went above and beyond the call of duty, continually working to apprehend a suspect that potentially presented harm to the community even after suffering a critical injury. It was my honor to present him with the Back the Blue award earlier today.”

Despite sustaining a critical injury, Officer Kennedy, still bleeding, continued to pursue the suspect, apprehending him after a pursuit of 10 to 15 yards. Officer Kennedy never lost sight of the suspect, and kept his composure. He was able to get the suspect to lay prone, holding him at gunpoint until backing officers could arrive. During that time, Officer Kennedy was on his hands and knees, feeling as though he was losing consciousness.

“I was mostly just thinking about how to stop this guy from hurting anyone else,” Officer Kennedy said. “… It was a tough day. Given everything that occurred, I’m still able to do my job in the way I was trained to do it and continue to be a proud member of this police department.”

Officer Kennedy was off duty for almost three months recovering from his injuries.

The Attorney General’s Back the Blue Award recognizes law enforcement across the state for incredible bravery and courage in the line of duty or extraordinary service to the community.