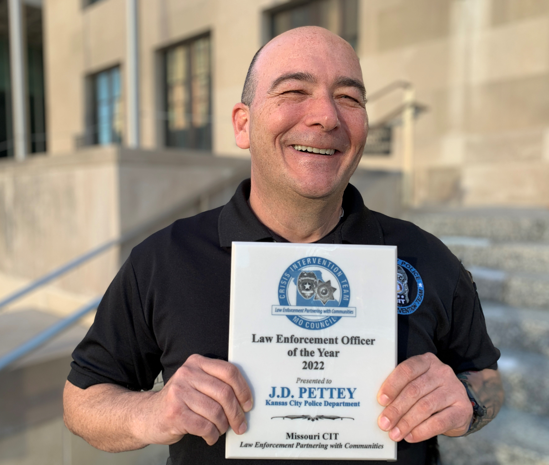 The man’s mental illness and substance abuse culminated with him barricaded in his house in a police standoff.

Thankfully, J.D. Pettey provided it. As a Crisis Intervention Team (CIT) Officer, Pettey is resourceful. He visited the man (who was in his late 30s) and his mom. Pettey connected the man to community mental health professionals and guided him through the judicial system, even testifying for him in court.

Pettey was the definition of constant contact. Today, the man is finishing his education, has a job, and is doing well. “I’ve stopped by and said hi, but that’s about it,” Pettey exclaims. “I haven’t seen him with me acting as a police officer in some time!”

Nothing’s routine in law enforcement, but Pettey understands his CIT role of finding help for people with a mental illness or substance abuse problem.

“My job is to connect people with services and not arrest,” Pettey states. “Arrest if we have to, but arrest is our very last resort.”

Pettey has been with KCPD for 25 years, after spending six years in the Army. There were two things that motivated Pettey to learn about CIT training.

About 18 years ago, Pettey and another officer responded to a call for a person in crisis. Pettey says the other officer had significantly less experience than him.

“I watched this officer quickly de-escalate this person, speak with them, and get them resources,” he recalls. “I was super impressed and asked how?” The answer was CIT training.

On a personal level, two of Pettey’s relatives died of suicide. Being an officer, he was the default person to talk to the law enforcement agencies where they died.

“I was treated wonderfully by one agency and horribly by another,” Pettey says. “I made a choice that I wanted to be like the people who treated me good.”

Pettey is a full-time member of KCPD’s CIT Squad. In addition to helping residents, he provides service to fellow officers. He trains officers statewide in CIT, which involves intervention, de-escalation, and suicide prevention techniques. At KCPD, Pettey teaches suicide prevention to officers in order to protect themselves and to recognize signs in others.

On his own time, Pettey is a volunteer mentor with the Clay County Veterans Court. He says the court helps veterans, who might suffer from PTSD, substance abuse, or mental illness, navigate the judicial system. Pettey is a “sounding board” for veterans who need someone to talk to, even if it’s 2 a.m.

In March, Pettey received the 2022 Missouri CIT Officer of the Year award. He was surprised and will tell you he was just doing his job. “There are thousands of officers who do hard work and good jobs every day. They’re just like me.”

For more information on our Crisis Intervention Team, visit https://www.kcpd.org/transparency/crisis-intervention-team/.