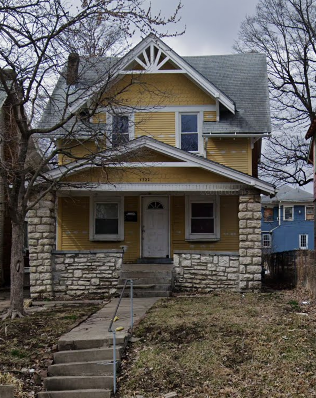 Officers were able to safely talk an armed man off the roof of a house Tuesday night.

The owner of a home under construction in the 3300 block of Brooklyn Ave. called police about 7:15 p.m. Oct. 6. He was rehabilitating the home, and he found another man staying inside of it without permission. The homeowner told the man he needed to leave, or the police could be called. The man brandished a knife and a hammer, then he climbed onto the roof of the house.

When officers first arrived, the man was on the awning over the porch. He refused to come down, yelling obscenities at officers and stating, “I go to jail for vacation!”

The man then climbed further up onto the roof of the house with a knife in his hand, where he continued to refuse to come down. Using a public address system, officers were able to convince him to throw the knife down. He then appeared to light objects on fire and throw them at officers on the ground, but they discovered they were just battery-operated candles. The officers on scene called for additional officers specially trained in negotiation.

One officer began speaking to the man from a second-story bedroom window. That officer was able to convince the man to come down before the negotiators even arrived. Officers took him into custody without incident. They arrested him for trespassing, but first they took him to a hospital for a mental health evaluation.