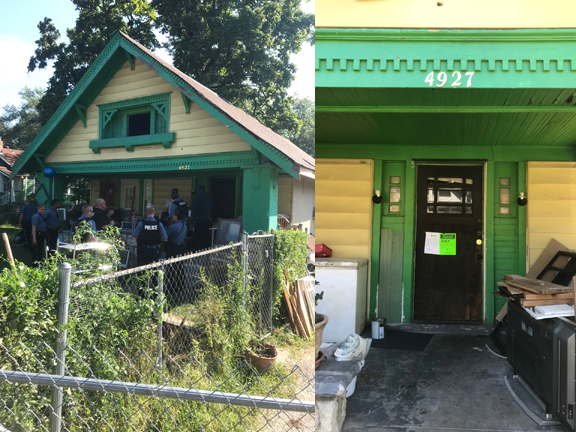 Neighbors made police aware of a problem house in the 4900 block of Wabash through social media on Sept. 4. In just a week, the issue was resolved with arrests and evictions.

Neighbors complained that drugs were being sold from the house, and trash was accumulating outside of it, leading to a rat infestation. They felt unsafe because of the violence that accompanies drug traffickers. They were at their wits’ end, however, after making multiple official complaints through other avenues. But when officers at Metro Patrol Division heard about the issue, they took it upon themselves to address it and address it quickly.

Police stopped a car in front the house Saturday night, Sept. 7. The driver and passenger were attempting to hide under the dashboard. Both of them had felony warrants, and police also recovered multiple types of drugs and an illegally possessed firearm from inside the car.

Then on the morning of Sept. 11, police worked with the Drug Abatement Response Team of Jackson County COMBAT to shut down the house at 4927 Wabash. The home had multiple safety and code violations, and its occupants were stealing electricity. Officers evicted seven people from the home that morning, many of whom were transients. They turned off utilities, boarded up the house, and now anyone seen there will be arrested for trespassing.

Police spoke with residents on the block about what they’d done and told them to report any trespassers. Neighbors were ecstatic.

“I’m thanking God for you and the wonderful team you have,” one of them later wrote.