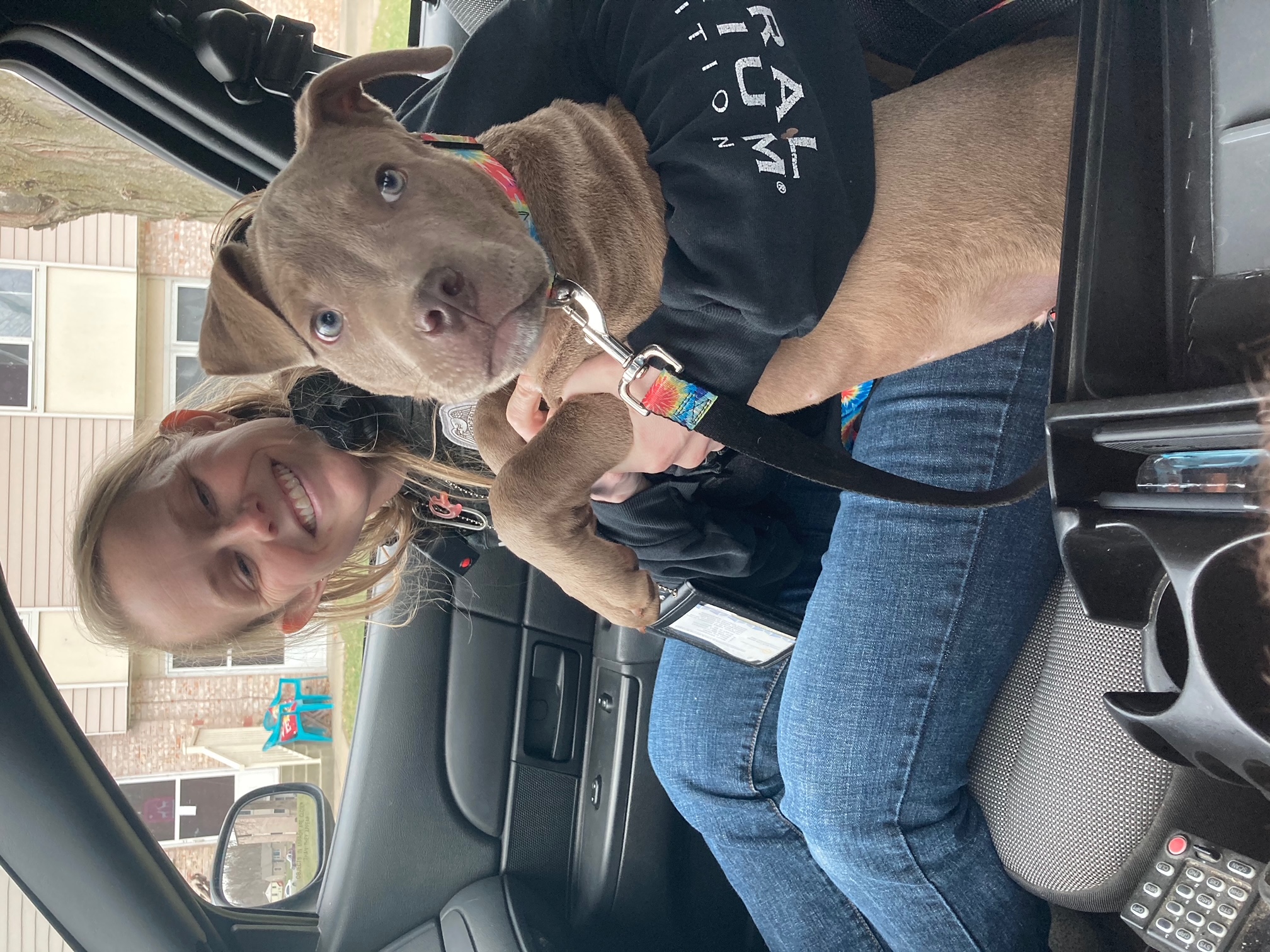 Thanks to the work of a dog-loving police officer, a stolen puppy is back with its rightful owner after a stand-off.

A resident of the Marlborough neighborhood came home from work March 6 to find her 13-week old pit bull puppy, Piglet, missing from his kennel. She thought he’d gotten out, but as she looked around, she realized items in her house were in disarray, and other items had been stolen. She checked her home security camera and saw a man break into her home and leave with her puppy and some other items. She called police.

Officer Brielle Johnson (pictured above with Piglet) and her partner took the original report. Afterward, the victim posted fliers around the Marlborough area with pictures of her missing puppy and the picture of the suspect taken from her security camera. The suspect had looked right into the camera, making for a good photo. Someone who wanted to remain anonymous contacted the victim, saying they knew the suspect, and even provided the name on his Facebook account. The victim saw pictures of her puppy posted on the suspect’s Facebook page. She called police with the additional information.

“I have two dogs,” Officer Johnson said. “Someone could steal my TV or my car; those are just material items. But stealing someone’s animal - they have love and loyalty invested into the animal - it’s different, it’s a family member.”

Johnson and the detectives found the suspect at a house in the 7900 block of Euclid about 2 p.m. Tuesday, March 16. The suspect, however, refused to come out, and police had information that he may be armed. A stand-off ensued, bringing tactical officers and negotiators to the scene. About an hour and a half later, the suspect emerged from his home, and police took him into custody with no further incident. It turned out he lived in the same neighborhood as the victim.

Afterward, when police interviewed the suspect, 27-year-old Keinan Jackson-Doolin, he told officers he had taken the puppy. He also told them he’d already sold it.

“I was really sad and worried when he said he’d sold it,” Officer Johnson said. “Who knows what could have happened to it then.”

But the suspect said if police would give him his phone, he’d show them the person he sold it to. He did so. The woman who bought the puppy was unaware that it had been stolen. She’d paid Jackson-Doolin $200 for Piglet. While she was sad to be out the money, she wanted to do the right thing and return the dog to its rightful owner. Officer Johnson helped facilitate Piglet’s transfer back to his original owner.

Even so, Officer Johnson and the Metro Property Crimes detectives felt bad for the woman who unknowingly purchased the stolen puppy. They pooled their own money to reimburse her the $200.

Jackson-Doolin has been charged with felony burglary and stealing. He was already out on bond for three other burglary cases at the time of the offense.