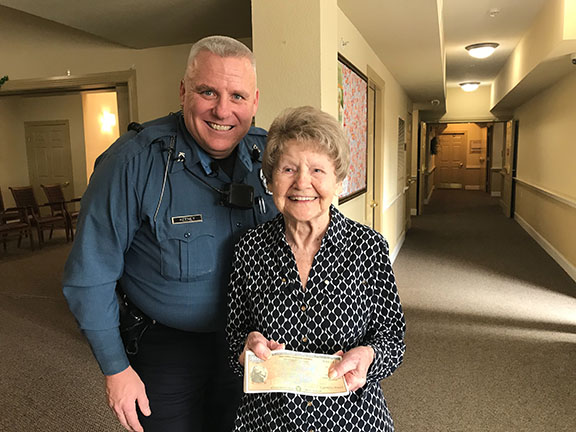 A 93-year-old woman got a nice windfall Thursday thanks to a KCPD vendor and some dedicated officers.

KCPD works with PropertyRoom.com to auction off and/or return property that has been recovered in criminal cases after the cases have been adjudicated. In 2018, KCPD gave PropertyRoom.com 28, $100 U.S. savings bonds that had been part of stolen property that was recovered from a thief. Staff at PropertyRoom.com worked to track down the owner of the bonds, who turned out to be deceased. The bonds had been issued in 1989. A secondary name was on the bonds, however: Jimmie Charlene Herbst. She was the wife of the primary bond recipient. But after two years, PropertyRoom.com staff was still unable to locate her and reached out to KCPD for help to find her.

By searching through police records, Officer Bill Keeney saw that Jimmie Herbst, who goes by Charlene, had been the victim of a burglary in 2016, but she was in a nursing home at the time. Neighbors reported the burglary at her empty home. After more digging, Officer Keeney found Mrs. Herbst at the Gardens at Barry Road Assisted Living and Memory Care. She had outlived her husband and son and had no family in the area.

Officer Keeney discussed what was happening with fellow Shoal Creek Patrol Division Officer Erik Winter. Officers Winter immediately recognized Mrs. Herbst’s name. He had befriended her in May 2016 when he found her alone in a home that was uninhabitable. Officer Winter took on the role of a family member, securing her a new place to live at Gardens at Barry Road. Once she moved in, he continued to visit her, giving her a ride to wherever she needed to go and even helped her sell a car she no longer needed, often on his own time. He remains her point of contact nearly four years later.

Officer Keeney and Gardens at Barry Road staff surprised Mrs. Herbst with the bonds today, which have now more than doubled in value and are worth more than $5,700.

With a huge smile, she received the recovered bonds, stating, “I’m flabbergasted!”

Mrs. Herbst, offered Officer Keeney a hug and told everyone thank you. Officer Winter wanted to attend today, but was needed at a call for service.