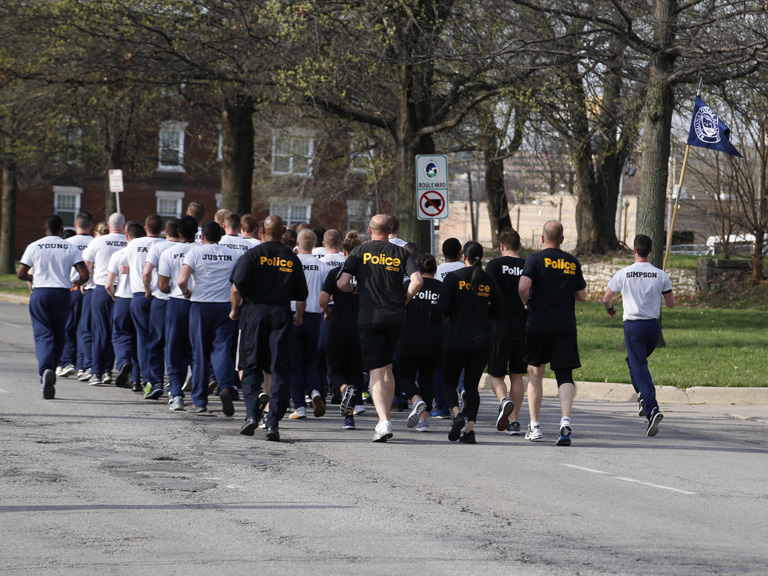 Members of the Kansas City Missouri Police recruit class set to graduate next week will honor the officers who lost their lives in a landmark event 86 years ago, and they’ll be joined by some special guests.

At 9 a.m. Sept. 6, the recruits of Entrant Officer Class 166 and Academy staff will run to Police Headquarters at 1125 Locust St. from 12th and Broadway. They will do a push-up tribute at the fallen officer memorial statue in honor of those who lost their lives at the Union Station Massacre on June 17, 1933. Members of the FBI’s Kansas City Field Office will be present, along with Chief Gary Wansick and another representative of the McAlester, Okla., Police Department. The recruits will leave Headquarters and run to the lawn area of Liberty Memorial overlooking Union Station, where they will do a light workout. The public is invited to watch the run and exercises. It also will be live-streamed at facebook.com/kcpolice.

According to the FBI, the Union Station Massacre involved the attempt by Charles Arthur “Pretty Boy” Floyd, Vernon Miller and Adam Richetti to free their friend, Frank Nash, a federal prisoner. Nash escaped from the U.S. Penitentiary in Leavenworth, Kan., on Oct. 19, 1930, after receiving a 25-year sentence for assaulting a mail custodian in 1924. Two FBI agents, Frank Smith and F. Joseph Lackey, and McAlester, Okla., Police Chief Otto Reed located and apprehended Nash on June 16, 1933, in a store in Hot Springs, Arkansas. They took him on a Kansas City-bound train due to arrive at Union Station at 7 a.m. the next day. Meanwhile, a number of Nash’s outlaw friends made plans to free him.

Upon the arrival of the train in Kansas City, the lawmen and their prisoner were met by FBI Special Agent in Charge Reed Vetterli, FBI Agent R.J. Caffrey and Officers W.J. Grooms and Frank Hermanson of the Kansas City Missouri Police Department. They walked their captive out to a waiting vehicle. As they were getting in, Floyd, Miller and Richetti ambushed them with gunfire. In addition to killing the man they were trying to free, the shooters also killed FBI Agent Caffrey, McAlester Chief Reed and KCPD Officers Grooms and Hermanson.

Vernon Miller was found dead after an altercation with a fellow outlaw two months later. “Pretty Boy” Floyd was killed in a shoot-out with Ohio police in October 1934. Adam Richetti was captured in that same incident. He was tried, convicted and then executed in 1938.