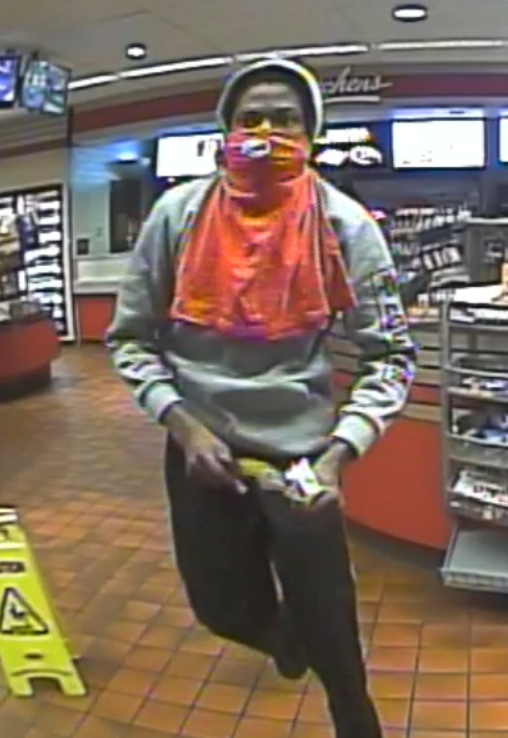 A serial Northland robber is in custody thanks to some observant and proactive KCPD officers.

The robbery spree began at 5:30 a.m. Sunday, Oct. 13. With a T-shirt tied around his face and armed with a knife, the suspect robbed the Quik Trip at 1251 NW Barry Rd., the Temp Stop at 4411 NW Barry, and finally the Casey’s at 10751 North Oak at 7:20 a.m. He’s suspected in a fourth nearby robbery that morning, as well, but detectives are still collecting evidence in that incident.

Robbery detectives feared he could strike again, so Tactical Response Team officers have been conducting extra patrols in the area since Sunday.

At about 8:30 p.m. Wednesday, Oct. 16, the same suspect did, in fact, try to rob the Red Wok at 9322 North Oak with a knife. He was wearing a purple hoodie and gray pants with a dark cloth tied around his face. He asked for cash from the register, but the employee wouldn’t give him any. Instead, the suspect grabbed money from the tip jar. The employee chased him into a nearby apartment complex but lost sight of him. More than three hours later at 11:47 p.m., the same suspect robbed World’s Liquor at 9351 North Oak, this time with a gun. The victim told officers a police car had just driven through the business’s parking lot two minutes before the robbery occurred.

The Tactical officers started circling the area, looking for the suspect. At about 12:20 a.m., they spotted the man in the purple hoodie and gray pants with a cloth tied around his face. The man was approaching the Shell station at 8401 North Oak. As he walked toward the store’s front door, he pulled a gun from his waistband. The officers moved in, and the suspect took off running. He threw his gun but kept going. The officers caught up to him quickly and got him into custody without incident. They also recovered the gun.

The suspect is an 18-year-old Kansas City resident who lives in close proximity to the businesses he robbed. Fortunately, no one was physically injured in any of the incidents. The cases have been submitted for prosecution.