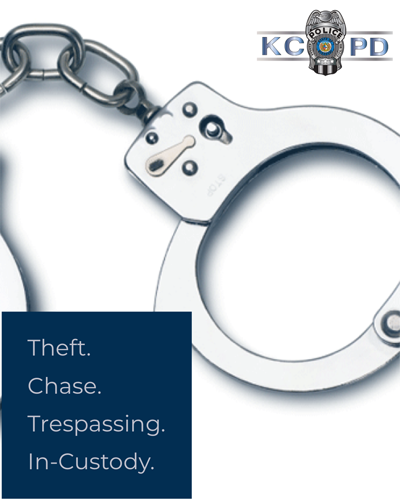 A shoplifting took an unexpected twist when officers encountered the suspects in the store parking lot Sunday afternoon.

Officers were dispatched to the Kohl’s at 8500 N. Madison on a theft at 1:25 p.m. March 24, but as they arrived, loss prevention officers were chasing out two different people who were stealing, unrelated to the original call. As police approached the suspects, they got into a waiting vehicle to drive away. They drove at a sergeant’s occupied police car, striking its side mirror, in their attempt to flee. Due to the suspects’ erratic behavior and their striking an occupied police vehicle, officers pursued the car.

The suspect vehicle was occupied by two women and a man. One of the women was driving. It fled south onto 169 Highway at a high rate of speed. Officers pursuing the car could tell there was an argument going on inside the vehicle. It came to a dead stop in a lane of traffic on 169. At that time, the man got out and ran. He ran into the open garage door of a nearby home. The home’s occupants did not know him. Police took him into custody in the garage.

Other officers took the women in the car into custody. The driver told them she did not want to run from police, but the man did, and that was the argument they saw. She turned the car off to make it stop on the highway. One of the women already was wanted for another felony shoplifting case.

Detectives have presented the case file for charges of felony eluding and felony theft to the prosecutor’s office.