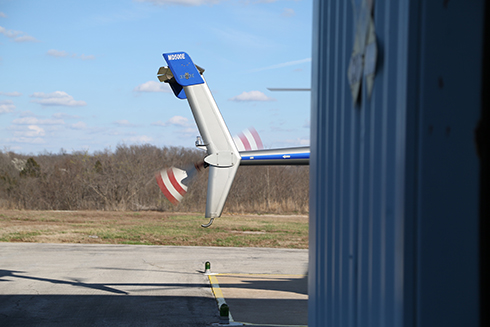 In November 1967, Kansas City, Missouri Police Chief Clarence Kelley and commanders implemented aerial patrols over the city using a helicopter. Three Hughes 300B helicopters were purchased. One commander and five officers were then sent to Long Beach, California for flight training. Upon completion, all six members received commercial pilot rotorcraft ratings and began the task of patrolling the city. Eventually, three officer/pilots obtained their instructor ratings and continued to train new officer/pilots as needed. In 1971, full time maintenance mechanics were hired to service the helicopters and in 1972 a facility/hangar was constructed near I-435 and Manchester Trafficway. In 1972 the Helicopter Unit was comprised of 24 law-enforcement and 6 civilian members.

By 1995 the number of personnel assigned to the Helicopter Section was reduced to eight and the police department took delivery of four military surplus Hughes OH-6A helicopters and began the task of refurbishing these “turbine” powered helicopters for law enforcement use. By 2001 all of the Hughes 300B helicopters were sold and the fleet was reduced to three Hughes OH-6A turbine helicopters. In 2008, the police department took delivery of a fourth Hughes OH-6A helicopter from the US Army. In September 2012, the helicopter fleet was replaced by three brand new MD 500E helicopters, valued at about $8.6 million, which were custom-built to meet KCPD’s equipment needs and specifications. Two of the choppers were funded by the quarter-cent Public Safety Sales Tax, which voters approved in 2002 and renewed in 2010. The third was paid for by a combination of a federal grant and asset forfeiture funds.

The old helicopters were returned to the U.S. Department of Defense and could be reallocated to other police departments.

Uses for the Helicopter Section

The Helicopter Section assists other department elements in the prevention of crime and disorder and the apprehension of criminals. This is accomplished by providing two airborne patrol shifts, seven days a week. In addition to air patrol, the section conducts aerial surveillance, photo flights and public demonstrations. The section also plays a key role in special events, emergency operations and dignitary visits to Kansas City, Mo.

While airborne, the helicopter crew continuously monitors the police radio frequencies and responds to those calls for service most likely to assist officers on the ground.

Those calls for service include:

A helicopter crew consists of a pilot and observer. The pilot is tasked with the safe operation of the helicopter and it’s systems as well as communication with other aircraft in the area and with the air traffic controllers of both the Downtown Wheeler and KCI International Airport towers. The observer is tasked with directing the pilot to specific incidents, radio communication with the police dispatcher and officers on the ground and completing required written reports. The observer is also responsible for the operation of the spot light and forward-looking infra-red camera during night time operation.