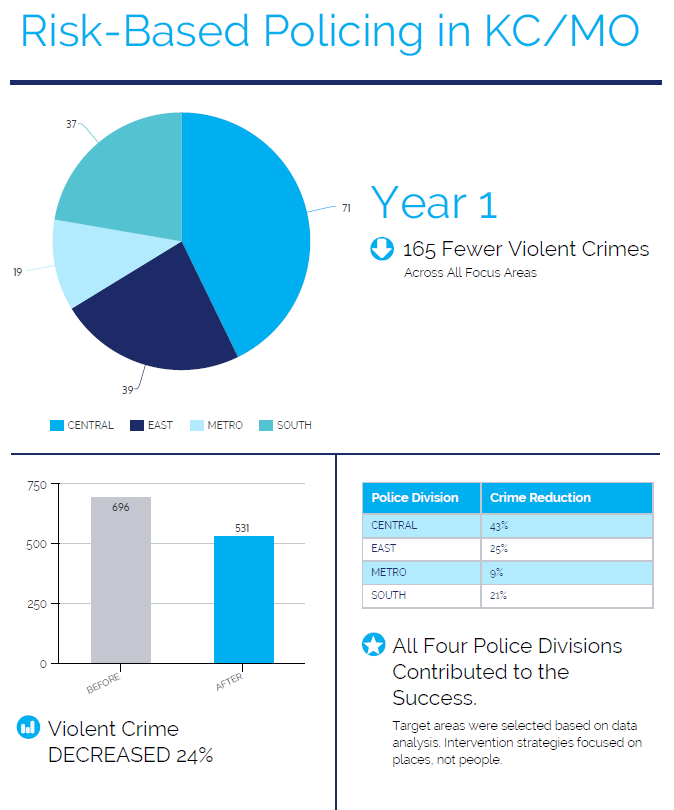 We implemented an innovative crime-fighting strategy one year ago, and it has reduced violent crime in our project areas by 24 percent, according to a new analysis by Rutgers University.

We worked with criminal justice scholars from Rutgers to implement an evidence-based strategy that helps determine where crime or other problems are most likely to occur: Risk-Based Policing (RBP). RBP is a crime prevention and reduction tool that builds on the analytical technique Risk Terrain Modeling to look not at where crime has already occurred but features of the physical environment that will cause crime. A key aspect of RBP is it focuses on places, not people. It also does not take into account historical crime or arrest data, making it different from previous hot spot policing efforts. RBP overlays a number of geographic data to show police (and their partners!) where a crime problem is most likely to emerge, allowing preventive measures to be taken in that area. Known as “risk factors,” examples include liquor and convenience stores, vacant properties, properties with code violations, parks, bus stops, and many more. They may be completely innocuous on their own, but the risk of crime can increase dramatically if many are in the same general vicinity.

RBP gave us an idea of areas in the city at highest risk for violent crime. Seeing these areas of concentrated risk areas allow police, city government, and other partners to martial resources to address issues. For example, police can perform liquor license checks at businesses selling alcohol in high-risk areas and request follow-up from Regulated Industries. Police can also share advice and recommendations to property owners about how to reduce risk of crime through means such as better lighting or security cameras. In addition, KCPD members share RBP data with municipal departments to help enforce code violations or fix broken streetlights. This helps everyone share the burden of true public safety when compared to traditional enforcement-focused measures. In turn, RBP ultimately results in a more holistic service to the public.

Using objective RBP data as a guide, KCPD devoted resources to some of the highest-risk areas in the city. The recent analysis from Rutgers compares the year before we implemented RBP – March 15, 2018 to March 14, 2019 – to the year since – March 15, 2019 to March 14, 2020. It also looked at control areas with similar levels of environmental risk that did not receive the specific tasks based on the RBP concept. Note, this does not mean the KCPD did not provide police service or other necessary responses in these areas.

The RBP strategy focused on violent street crime (homicides, aggravated assaults, and robberies) in our four patrol divisions south of the Missouri River – Central, East, Metro, and South – because they have the highest incidence of these violent crimes.

Researchers found violent street crime decreased 24% overall when looking at all focus areas. In more practical terms, this means Kansas City had 165 fewer violent crime victims in the areas where RBP was used in just one year. The control areas saw only a combined 1% reduction in violent crime. These findings are also statistically significant, meaning we can have confidence the reductions are due to our efforts as opposed to random chance.

Here are the results for violent street crime in each of the four divisions:

· Central: 43% decrease
· East: 25% decrease
· Metro: 9% decrease
· South: 21% decrease (although to be fair, unlike Central, East, and Metro, researchers found much of the violent crime here was displaced nearby)

Read more on the blog...