KCPD commander badges are taking a blast from the past to be standardized with badges worn by officers and sergeants.

Beginning today, all captains, majors, deputy chiefs and the chief traded in their smaller, rounded, gold badges for a two-toned, platinum- and gold-colored badge shaped like those worn by line personnel.

The shape of the badge officers and sergeants wear is trademarked and unique to the Kansas City Missouri Police Department.

The old captain badges had numbers, but those for majors, deputy chiefs and the chief did not. Now they all are numbered. Chief Richard Smith was issued No. 46 because he is KCPD’s 46th Chief of Police.

When the Department returned to state control in 1939 after a corruption-filled period of “home rule,” all badges were standardized. They featured the same, unique, eagle-topped shape officers wear now, but with different titles. Kansas City Missouri Police Historical Society members could not identify a date when the different, smaller commander badges were reinstituted. While they don’t know why, they said commanders at the time probably wanted to be distinguished in some way from line personnel.

While most KCPD badges will now be shaped the same, the colors will differentiate the ranks: silver for officers, gold for sergeants and platinum and gold together for commanders. The colors are just that – colors. The badges are not made of any precious metals. Detectives are still issued smaller, rounded, silver badges. 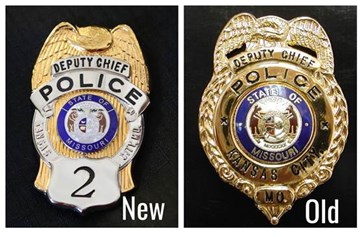