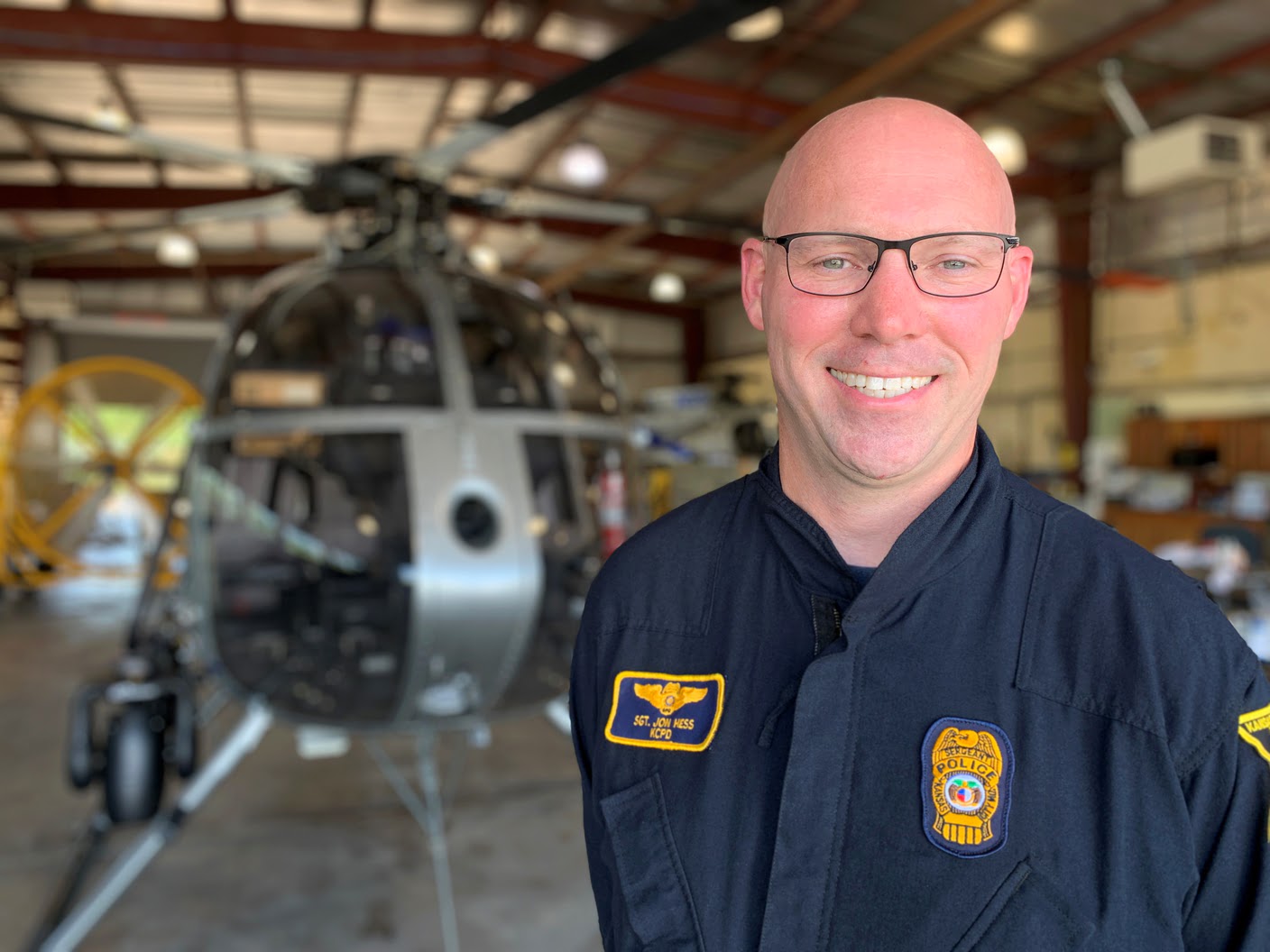 Sergeant Jon Hess wanted to fly so badly, he worked Indiana summers in a plastics factory in order to pay for flying lessons.

He was 16 and he knew what he wanted to do with his life. Then again, Hess also wanted to be a police officer, mimicking his father’s life in the small town of La Porte, Ind., an hour east of Chicago.

“It was the 80s and they all had take-home police cars,” Hess recalled. “It wasn’t uncommon for us to go to the store and do things in the car. I grew up in a police car.”

He joined KCPD in June of 1999 and though he’s now in the department’s Helicopter Unit, it took him 20+ years to bond his passion for policing and flying. Hess has worked many assignments over the years which include Patrol, Internal Affairs, Sex Crimes, Crimes Against Children, and Investigations.

A couple of times there were openings to join the Helicopter Unit, but Hess had just begun new assignments and didn’t want to leave them so quickly. Once, he simply didn’t know about the opening.

“Before we used email and Internet for assignments, they would advertise jobs on a green sheet at a patrol division,” Hess said. “Someone asked if I had applied and I said I didn’t know about it. I missed it.”

Hess admits his weight also made him pause. To fly a KCPD helicopter, pilots and observers must weigh less than 215 pounds. Hess has a large frame standing 6 feet, 5 inches tall. He says he used to weight 225-230 pounds and was unsure he could consistently keep his weight at 215 or below.

Since joining the Helicopter Unit in October of 2020, Hess has learned how to fly helicopters. Despite flying planes since high school, piloting Cessnas and Pipers regularly, and serving as a flight instructor, Hess had never flown helicopters.

He learned at KCPD which teaches those with or without flying experience.

“We have an in-house instructor here,” Hess said. “It would probably cost up to $30,000 to get your private pilot rating in a helicopter. It’s a big benefit to be here.”

Hess says that newbies to the Helicopter Unit start out by observing. It’s a difficult role. Noisy. Slightly uncomfortable. Multi-tasking between watching the ground and looking through a camera. Once officers are up to par observing, they advance to flight training.

In a typical two hour mission, Hess says the pilot and the observer will trade duties and take turns. Often, the officers in the air will relay information to officers on the ground, respond to crashes, assist with car chases, and help find people who are missing and endangered.

Recently, Hess and Officer Joseph Chabot helped find a woman in her 80s with dementia who had gone missing. When officers on the ground pinged her phone, Hess and Chabot zeroed in on a general area. Despite nightfall, the pair used thermal imaging equipment to pick up the woman’s body heat and find her, bringing her to safety.

Twenty-three years into his KCPD career, Hess says he’s had the best of both worlds.

“I really enjoyed being in patrol and being a detective,” Hess reflected. “Being in the Helicopter Unit has been everything I thought it would be too. I absolutely loving being out here.”