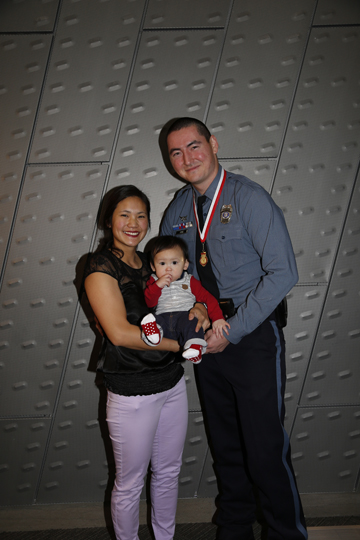 Chief Richard Smith presented Officer John King for stopping a woman who was firing shots at a Northland Department of Motor Vehicles office while he was off-duty with his wife and baby.

Officer John King encountered an armed suspect, tackled her before she could fire her weapon and took her into custody the morning of July 9th of this year. It was around 11 a.m. that day, and Officer King and his family were heading to the Parkville DMV in Kansas City to register their vehicle. As they pulled into the parking lot, they saw a flood of people running out the back door of the DMV. Officer King could tell by the fear on their faces, something was very wrong. He told his wife to drive herself and their infant son to a safe location after he got out of the vehicle and ran toward the building.

As he was heading to the DMV, he asked a person running in the opposite direction for details of what was going on. The person told Officer King a woman, who was inside of the DMV, walked outside and immediately fired a gun in the parking lot. The bystander pointed to a female who was sitting alone in a car as the person who had just fired a gun.

Officer King kept his eye on the woman in the car and called dispatch to tell them what was going on and requested back-up from on-duty officers. Dispatch told him officers were on the way, so he planned to keep observing the woman until they arrived, but she suddenly got out of her car, carrying a purse. She was headed back into the DMV.

Not knowing if anyone was still inside of the DMV, Officer King knew he could not wait for assisting officers to arrive. He drew his firearm and identified himself as a police officer because he was not wearing a uniform or badge. He commanded the woman to put the purse down and get on the ground. She refused and continued to walk towards the DMV building.

Officer King saw she did not have a gun in her hands, but feared it was in her purse. Before she could reach the entrance of the DMV, Officer King ran toward her, taking her down in the parking lot. A nearby citizen ran over to help Officer King keep her in custody until assisting officers arrived.

As she was being taken into custody, officers discovered what Officer King had feared; she had a loaded firearm in her purse. She was later charged with discharge of a firearm.