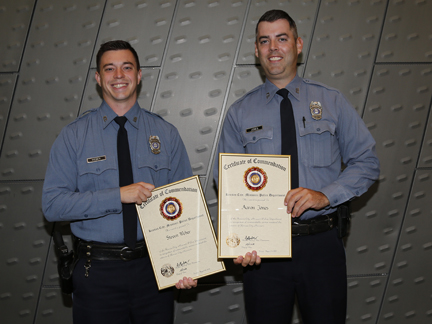 Officers Aaron Jones and Steven Weber were watching a local church parking lot Feb. 23, 2019, while the funeral of a 15-year-old homicide victim took place. An’Janique Wright was killed outside a basketball game at the Central Academy of Excellence on Feb. 12. In the days leading up to the funeral, investigators learned there was a potential for retaliation at the services. Officers Jones and Weber were assigned to park close to the church so they could be highly visible to discourage violence while family and friends attended the funeral.

Three hours into their surveillance, Officers Jones and Weber saw a gray Nissan drive by, actively shooting in the direction of the church, where hundreds of people had gathered and where officers were plain sight. As soon as the shots began, Officers Jones and Weber immediately started following the car to stop it. The driver was uncooperative, so police had to pursue it.

Officers Jones and Weber remained calm during the entire pursuit, effectively communicating information to other officers on their whereabouts and also ensuring other officers responded to the church to check on possible victims. Fortunately, no one was hurt. The pursuit ended when the suspects’ car crashed at Blue Parkway and Cleveland. Three men jumped out of the wrecked car and started to run, but police took them into custody. Officers recovered three guns at the scene, which were also linked to an armed robbery.

Chief Smith awarded Officers Jones and Weber the Department’s Certificate of Commendation at the Aug. 20, 2019, Board of Police Commissioners meeting.