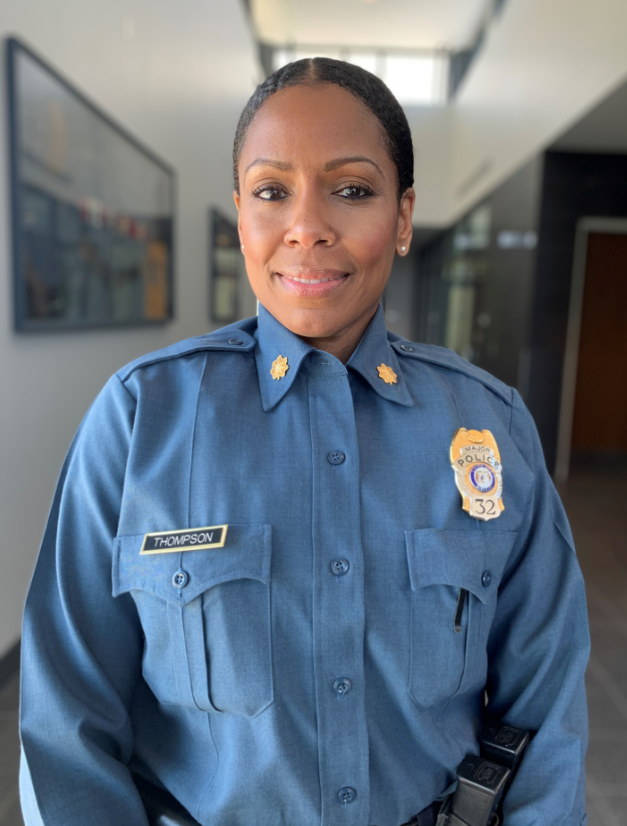 “There are more guns out here than officers,” points out Major Kari Thompson.

The workload is high. The task is challenging. Yet, the effort to serve and protect Kansas City is unyielding, too. Thompson sees it firsthand, leading East Patrol Division since May of 2021.

East Patrol experienced a significant drop in homicides last year – 48 compared to 79 in 2020. They’re up in 2022, but it’s early, and Thompson’s pulse on her people confirms good police work.

“I’m not ignorant to the fact that there’s negativity out there,” Thompson says. “Things won’t always be perfect, but our effort will be.”

Thompson likely inherited her can-do attitude from her parents. Her mother was a nurse and social worker, while her father was an industrial engineer. Together, they taught Thompson to serve her community and church in Tulsa, Okla.

Back then, she also loved a certain teen book series.

“I had a great interest in mysteries,” Thompson recalls. “I read Nancy Drew books. I loved solving puzzles and mysteries, and I thought that was what police officers did.”

The books helped but didn't lead directly to the police academy. Thompson was a claims adjuster out of college before transferring to Kansas City. After arriving, she took a leap of faith and joined KCPD in late 2002. True then and still today, policing needs more women, Thompson acknowledges. Still, her skills were on full display.

“I was able to defuse disturbances and change the narrative, change the tone, bring things down,” Thompson states. “I quickly found my niche in my sector, and it was a great experience.”

As a sergeant, Thompson was assigned to the Special Victims Unit (SVU), where she helped create a plan that identified repeat suspects to SVU prosecutors. She was also a department spokesperson, serving as a Public Information Officer in the Media Unit, informing the public of KCPD efforts. Eventually, Thompson earned a promotion to captain at Shoal Creek Division.

Last May, Thompson was promoted to Major at what she calls the “Exceptional East Patrol Division.” She’s impressed by the resolve to address the overwhelming number of illegal guns on the street. To that point, her patrol officers have been diligent about arresting felons in possession of firearms.

Thompson calls the women and men at East Patrol some of the most hardworking and resilient people she has served with. From them, she hears optimism that residents are seeing officers’ efforts to make neighborhoods safer.

“I take calls from our community,” Thompson explains. “People want us in their neighborhoods. They wave at us. I love this place, and I’m going to figure it out for them.”

This December will mark 20 years since Thompson entered the police academy. Sitting in her office on Prospect Avenue, Thompson thinks about moving to Kansas City, not knowing much about it then, and the impact she wants to have at East Patrol.

Point blank, she says, “This is my home.”